What was just a disorganized mass of thunderstorms 1,600 miles from Miami could develop into the first hurricane to hit Florida in nearly 11 years late this weekend, forecasters warn.

USA TODAY reported there’s a 60% chance the storm system, known for now only as “99L,” could develop into a tropical depression in the Atlantic Ocean later this week. If it swirls into a tropical storm, it will be named Hermine (Her-MEEN).

The system then could rapidly intensify into a large, potentially dangerous major hurricane that would target the Southeast U.S. coast Sunday or Monday, Weather Underground meteorologist Jeff Masters said.

However, as meteorologist John Morales of NBC-6 in Miami notes, “tropical weather forecasting is a very inexact science.”

Overall, 6- or 7-day forecasts of tropical cyclone location and intensity are “generally not very good,” according to Penn State University meteorologist Jon Nese.

But whether or not the system becomes a tropical storm or hurricane, gusty winds, heavy rains, and possible flash floods and mudslides could occur over the islands of the northeastern Caribbean Sea and the Bahamas, the National Hurricane Center said.

By Sunday, the system could bring deteriorating weather and sea conditions to the east coast of Florida, AccuWeather said. 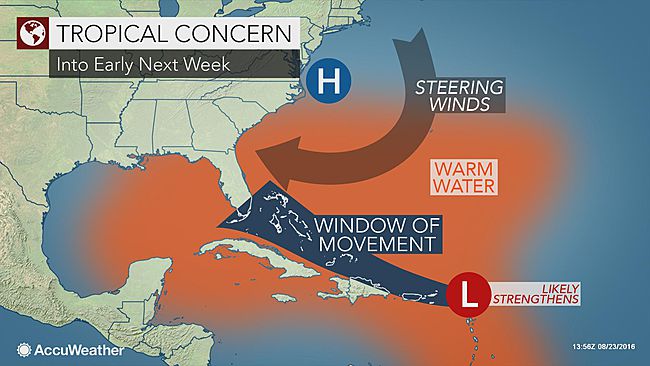 Most of the computer models meteorologists use to forecast tropical weather show the system hitting the Southeast U.S. between Florida and South Carolina sometime Sunday or later, Masters said.

One computer model, the European, shows the storm crossing Florida and emerging as a major hurricane in the Gulf of Mexico by next week, according to WeatherBell meteorologist Ryan Maue. But the American model, the GFS, does not show that movement.

The most recent hurricane to strike Florida was Wilma in October 2005, AccuWeather said.

A separate system, Tropical Storm Gaston, is projected continue spinning in the central Atlantic. It could become a hurricane later this week, weather officials say. That storm however, is expected to remain over the open Atlantic, though it could stir up strong surf along the eastern shores of Florida, said Scott Spratt, a meteorologist with the National Weather Service in Melbourne, Fla.