NEW YORK CITY — The prestigious Fringe Festival of Performing Arts, New York edition, has included in this year’s selection the play “Qaddafi’s Cook”, based on the experience of two Mexican chefs who worked for the ousted Libyan leader Muammar Qaddafi.

Inspired by the experiences of Mexican chefs that are identified in the play as Sergio and Fredy, the play was written by playwright Lance Belville assisted by Carlos Ambrosi, who was the Mexican chef who reportedly worked for Qaddafi until 2007.

Directed by Lynn Lohr, the play is starring Mexican actors Paola Madrigal and Alvaro Flores, who in June premiered the piece in editions of the Fringe Festival in San Diego and Hollywood, and they will perform in New York from August 20 to 27.

“In the play you can appreciate the experience of the chefs, at the moment of being in front of Qaddafi, and the atmosphere of permanent tension through which they passed, especially during the last days they worked for the dictator,” said Madrigal. 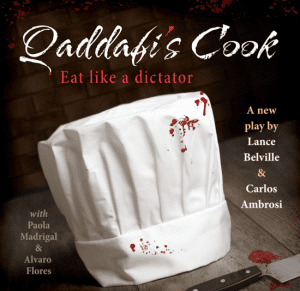 In an interview with Notimex, Madrigal said that Mexican cooks worked in Libya with no way to communicate with the outside, without their passports and with the constant feeling that they could be killed at the dictator’s whim, as had happened with other employees.

Qaddafi´s favorite Mexican food was, according to the sous chef Ambrosi, some of the simplest dishes of Mexican cuisine: dry noodles soup, muffins and milk caramel crepes.

The play, said Madrigal, is a reflection on the way Gaddafi dictatorship operated in Libya, which extended from 1977 to the beheading of the leader in 2011, thanks to a mixture of intimidation, complicity and brainwashing.

In the play, Madrigal represents a single role while her stage partner, Alvaro Flores, portrays four characters, two of whom are Mexican cooks.