“Sorry Mr. Trump: but you’re not welcome”, Mexicans protest all over the country

As it has become customary, President Enrique Peña Nieto faces a storm of criticism from Mexicans over his decision to meet Wednesday August 31 with Republican presidential candidate Donald Trump, who is widely reviled in Mexico for referring to its migrants as rapists and criminals.

Immigrant rights activist Maria Garcia, said she was already rushing out of her house Wednesday morning to buy cloth for a banner to carry at one of several protests called to coincide with Trump’s visit. The former Chicago resident said she plans to paint, “Trump, You’re not welcome here” on it.

Former first lady Margarita Zavala, herself a potential presidential candidate, aimed a tweet at Trump, saying: “Even though you may have been invited, we want you to know you’re not welcome. We Mexicans have dignity, and we reject your hate speech.”

Leading historian Enrique Krauze also addressed a tweet to Trump in English: “Listen … We Mexicans expect nothing less than an apology for calling us ‘criminals and rapists.'” 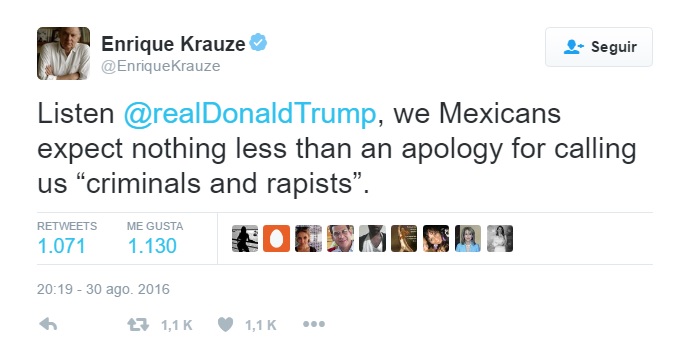 He compared Pena Nieto’s meeting to British Prime Minister Neville Chamberlain signing of a 1938 peace pact with Germany. “Tyrants are to be confronted, not pacified,” Krauze told the Televisa TV network.

Even Pena Nieto has made such such comparisons. Asked about Trump in March, Pena Nieto complained to the Excelsior newspaper about “these strident expressions that seek to propose very simple solutions.” He said that sort of language has led to “very fateful scenes in the history of humanity.”

Many Mexicans felt the Republican had left Pena Nieto flat-footed by accepting an invitation the Mexican president had made simply for appearances’ sake.

Mexico’s newspaper El Universal wrote in an editorial that Trump “caught Mexican diplomats off guard” by accepting the invitation, and “got one step ahead of them.”

Click here for full article on the Chicago Tribune