A budding tropical system in the central Caribbean Sea will impact the Yucatan Peninsula and parts of Central America with tropical storm conditions at midweek.

“The center of the system will approach Belize and the southern part of the Yucatan Peninsula with heavy rain and gusty winds late Wednesday or Wednesday night,” said Dan Kottlowski, AccuWeather hurricane expert.

The tropical system located south of Jamaica on Tuesday Aug. 2 will continue to move westward this week.

All interests in the western Caribbean should continue to monitor the track and strength of the system. The northern coast of Belize as well as low-lying areas in Quintana Roo could be subject to coastal flooding and beach erosion. In addition to the threat of flooding, trees can be knocked over and power outages are possible. Bathers and boaters can expect building seas and an increasing risk of rip currents into midweek.

Rain and winds from the system battered the Dominican Republic from Sunday to Monday. At least six people were killed after winds knocked down power lines onto a bus in Nagua, according to the Associated Press. 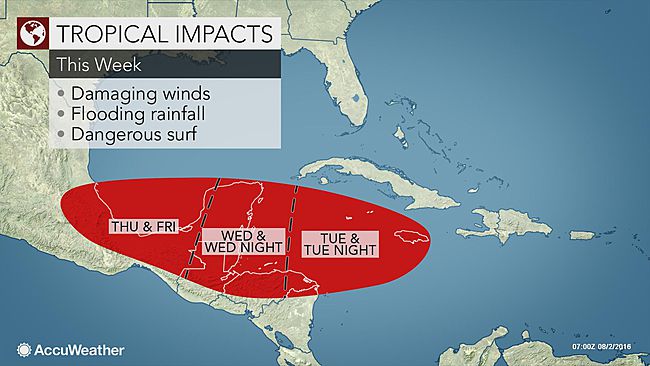 Significant gusty squalls and heavy rainfall will impact Jamaica on Tuesday and the Cayman Islands during Tuesday night. Flash flooding and mudslides can occur.

Depending on the track and speed of the system, similar conditions can reach parts of Honduras and Nicaragua early Wednesday. 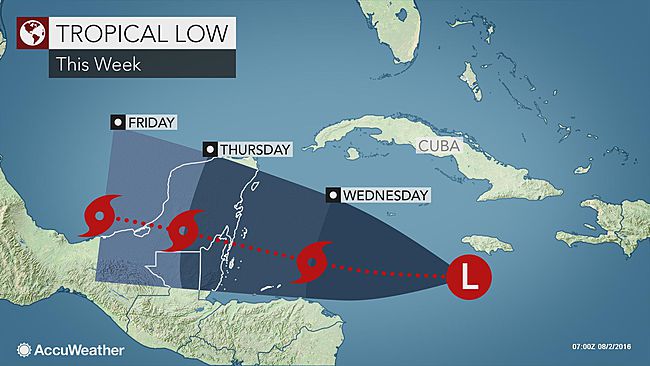 The very fast forward motion, 23 mph (37 km/h) will limit strengthening so that the system probably does not have enough time to become a hurricane.

The extent and severity of the rain and wind will depend on the strength of the system at landfall. Flooding and sporadic power outages can occur even if a minimal hurricane or tropical storm moves ashore.

Once over land, the system will weaken, but locally torrential rainfall and gusty winds will continue in the region during Thursday.

There is a chance the system will move back out over the waters of the southwestern Gulf of Mexico before the end of the week, where renewed strengthening could occur, Kottlowski stated.

“A second landfall could occur in northeastern Mexico during Friday or this weekend, depending on the system’s track,” he said.

While dry air surrounds the system, disruptive winds are decreasing and water temperatures are in the middle 80s F (29-30 C).

The warm water, diminishing disruptive winds and a decrease in forward speed should cause the system to strengthen to a tropical storm and perhaps a hurricane, prior to reaching Central America.