Most Americans live under the impression that “Cinco de Mayo” (May 5th) is Mexican Independence Day… But, if you are an Expat living in Mérida you are aware by now that September 15th is “Día del Grito”, date on which Miguel Hidalgo, father of the Mexican Independence (besides the fact that he was a priest), called upon the people to raise against the Spanish Viceroy and European-born Spaniards.

Hidalgo marched across Mexico and gathered an army of nearly 90,000 poor farmers and Mexican civilians who attacked and killed both Spanish Peninsulares and Criollo elites, even though they lacked training and were poorly armed. Only 10 months after the “Grito”, Hidalgo was executed by a firing squad, on 30 July 1811 in the northern city of Chihuahua.

So, for hundreds of years now, Mexicans get together on the night of September 15 to celebrate the “Cry for Liberty”, and this is obviously a great excuse to party, do some eating some drinking some singing and some dancing all through the night (because the official Mexican Independence Day is observed on September 16th), date on which a massive military parade is held in Mexico City.

And that is more or less how the traditional “Noche Mexicana” came to exist.

Now, this year, Hacienda Santa Cruz will be the setting for the most fantastic “Noche Mexicana” on Sept. 15, in fact it is a fundraising event to benefit Fundación BAI. Doors open at 8 p.m., and festivities start at 9.

Delicious Mexican traditional food will be prepared by a top chef and a Mexico City professional Mariachi show will be worth the ticket. (Ticket price is amazingly reasonable by the way, only $300 pesos per person, $15.80 USD at today´s echange rate)

A real bargain for a great authentic Mexican Independence Celebration, with a welcome cocktail, three-course meal and three feature presentations.

But what really matters here, is that you are helping contribute to Fundación BAI A.C., so that they can continue their important sex education programs, HIV testing labor and training to doctors and nurses, among other activities.

Beautiful Hacienda Santa Cruz is just 20 minutes away from the downtown area (You’ll find a map on the back of the ticket). You can take a taxi or use an Uber driver.

Tables are for eight people, a great opportunity to gather with friends or strangers for an enjoyable night out.

Tickets are limited. There is no guarantee that seats will be available the day of the event, so please plan ahead.

Contact Fundación BAI NOW to get your tickets or visit Robert Abuda Salon (where you can get your hair done by professionals to look amazing at the Noche Mexicana!), they are located on Paseo de Montejo (between 37 and 39).

See you there and VIVA MEXCO! 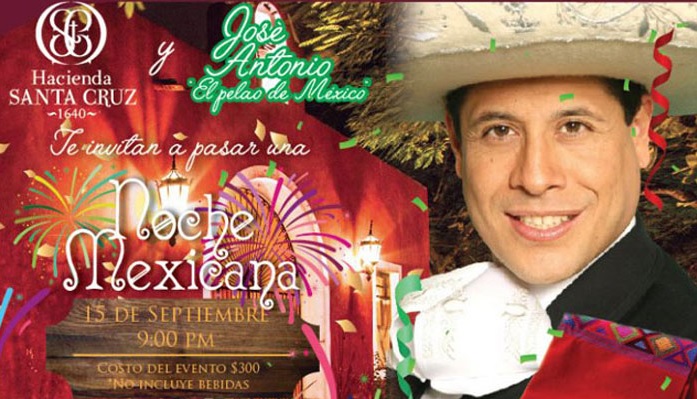