Hurricane Earl, which struck Belize early this month, was the last system to form prior to Fiona.

The projected path toward the central Atlantic would not take Fiona near any islands or large land mass through this weekend. After a period of moderate strengthening this week, Fiona will encounter more hostile atmospheric conditions and should weaken, AccuWeather Hurricane Expert Dan Kottlowski stated.

If Fiona remains relatively weak, then it could wander close to Bermuda later next week, perhaps with showers and thunderstorms. If Fiona strengthens to a hurricane, then it is more likely to curve northward over the middle of the Atlantic, well east of Bermuda. 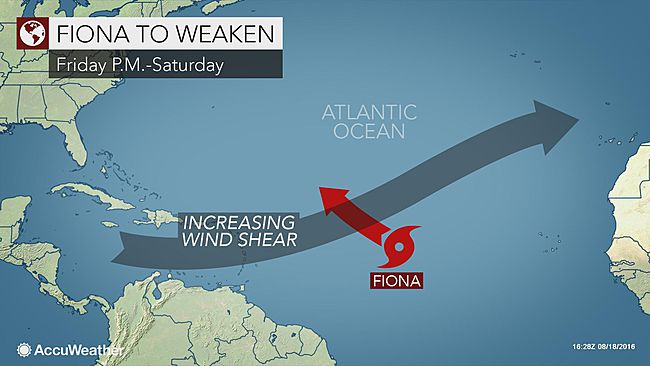 There is another disturbance moving westward over Africa and it is well-organized at this time.

“The next disturbance will push off the African continent on Saturday or Sunday and may become a tropical system very soon after it emerges over the Atlantic,” AccuWeather Meteorologist Evan Duffey said.

The stronger the system is while moving off the coast of Africa, the better the chance of overcoming dry air and disruptive winds in its path.
Early speculation on the path suggest this system could curve north prior to approaching the islands in the Caribbean Sea.

In between Fiona and the system over Africa is yet another disturbance that has a remote chance of becoming a tropical depression. Steering winds would direct this system much farther to the west than the other two features. At the very least, a pulse of showers and thunderstorms will affect the Lesser Antilles around Tuesday.

Following Fiona, the next name on the list of tropical storms in the Atlantic basin for 2016 is Gaston.

The 2016 Atlantic hurricane season forecast indicates La Nina may fuel the most active season in 3 years. A train of disturbances traveling from Africa to Central America has been ongoing for the past several weeks.

Dry air and disruptive winds have been a deterrent in this area during much of the summer, but that is beginning to change. Waves of moisture from Africa to the Lesser Antilles have become more extensive this week. The trend is likely to continue in the coming weeks.

The second half of August typically brings a strong uptick in development of systems originating near Cabo Verde (previously known as as the Cape Verde Islands. A number of these systems have been some of the strongest hurricanes in the Atlantic, including hurricanes Allen, Andrew, Gloria and Hugo.
The area around Cabo Verde creates a prime breeding ground for tropical systems through much of September.