At various times in her life, Georgia Charuhas has been a clothing designer, doll maker, art gallery proprietor and hotel operator. She has ridden horses daily on Yucatan beaches and studied flamenco dancing in Andalucia.

Throughout it all, she has painted and made art that bears a distinctive stamp. She continues to paint daily and is now preparing for a major group exhibition in Mexico City.

Charuhas, born in Chicago in 1943, has lived in Merida most of the past 43 years. Since first coming to Mexico in the 1960s, she has also lived in Puerto Vallarta, Cuernavaca and Progreso.

“To be able to paint, you need to have time and peace,” said the graduate of the prestigious Art Institute of Chicago. “I found that in Merida.” 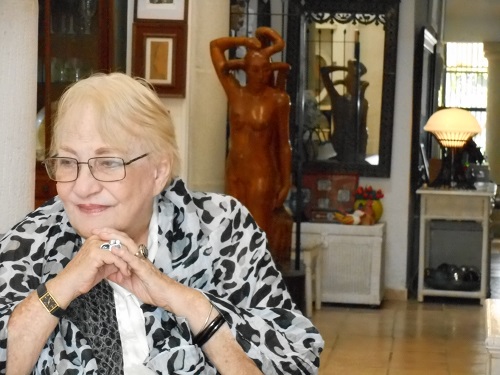 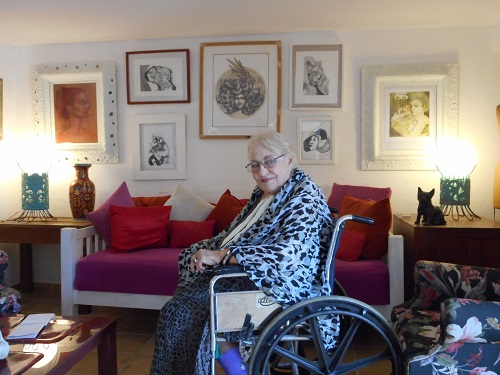 Charuhas’ home in Merida’s Santiago neighborhood is filled with her paintings, prints and other artworks. Many of her larger canvasses are currently on exhibition at Merida’s Museo de la Ciudad, located in the main Post Office building on Calle 56 at Calle 65.

According to notes by curator Oscar Muñoz, the works — mostly acrylic paintings on canvas — reflect Charuhas fascination with “mythic characters” ranging from Greek medusas to Maya aluxes. Rendered in warm reds, browns and purples, these fantastical, female figures seem to have sprung from dreamscapes.

Charuhas also is preparing for a museum show of women painters in Mexico City. The exhibition at the Museo de la Secretaria de Hacienda y Credito Publico will open Sept. 8.

Charuhas now uses a wheelchair because of hip injury suffered in a fall down a flight of marble stairs in a hospital, where she was visiting an ill friend. But she has lived a very active life that has included operating several art-related businesses.

“I fell into clothes-making almost by accident,” she recalled. “I was designing dresses for myself, and my friends would say, ‘Please make one for me.’ I ended up making clothes that were sold in the great stores all over the world.”

Among the famous department stores that sold the cotton gowns and jackets manufactured in Merida were Bergdorf Goodman, Nieman Marcus, Bonwit Teller and Harrod’s.

From the dress-making business, Charuhas spun off another venture — manufacturing whimsical rag dolls from the fabric scraps that remained. “I don’t like to waste anything. There’s always something wonderful you can do with what’s left over.”

Charuhas sold the dolls to Hallmark, which distributed them in its shops throughout the U.S.

Still a part-time businesswoman, Charuhas operates a gallery at Uxmal that sells pieces by Yucatecan artisans. In addition to functioning as her home and studio, her Merida house also is open as a gallery by appointment.

Twice married and divorced, Charuhas said she originally came to Merida in the early 1970s to escape a failed romance. “Merida was quite different then, something like the setting for an 18th century opera,” a small town full of big, beautiful houses, she recalled.

Reflecting on why she has remained in Merida, Charuhas shared some of her philosphy and political views, which tend toward a conservative perspective. She sees a breakdown of civil order in parts of the U.S. and Mexico but believes Merida is a respite from this. “Here they still believe in families,” she said.

More information about Georgia Charuhas is avaialable on her website, www.georgiacharuhas.com