57-story Torre Reforma is now the tallest skyscraper in Mexico

MEXICO CITY — Soaring 800 feet at the heart of Mexico’s bustling capital city, Torre Reforma has taken the title of the country’s tallest building. Designed by Mexican firm LBR&A, in conjunction with engineering company Arup, the fifty-seven-story eco-friendly tower was built to endure the region’s violent seismic activity, with its concrete core and cladding meant to bend slightly in the event of a quake.

“Torre Reforma will be able to withstand the full range of earthquake activity projected for a period of 2,500 years,” said Arup in a statement. The initial decision to clad two of the sides in concrete, unusual in skyscraper design, was inspired by the region’s architectural traditions of lining significant structures with stone.

Also helping to stabilize the tower against environmental threats is its triangular floor plan, which gives it “an inherent tendency to twist when subjected to lateral loads and wind,” according to Arup. 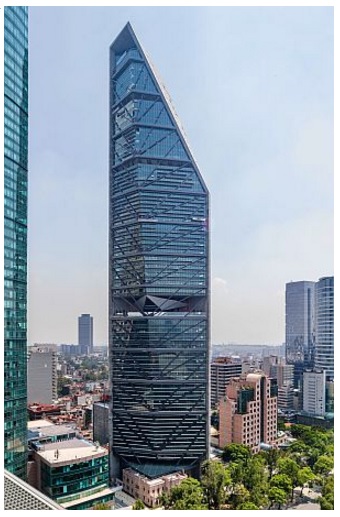 The distinctive shape, which includes a chamfered upper portion, maximizes column-free spaces and ceiling heights due to a program that groups elevators and stairways at the triangle’s apex.

With almost half a million square feet of office space, the mixed-use tower will also include a sporting facility, retail shops, and a conference center. It has already earned LEED Platinum precertification thanks to a number of sustainable features, including a rain-and-wastewater recycling program and energy-reducing ventilation systems.

Torre Reforma’s reign as the country’s tallest building won’t last long, however, with construction nearly complete on the 915-foot-tall Torre Koi, designed by VFO Arquitectos, on the outskirts of Monterrey.