Mexican elite lifestyle, preposterous for the rest of the population

British newspaper “The Guardian” posted a note revealing the spoiled behavior of the Mexican elite children, among them of course, Enrique Peña Nieto’s daughters and step daughters.

In a country where being a politician is seen as equivalent to ‘winning the lottery’, observers are hitting back at the behavior of the children of elites.

When pictures emerged of Sasha Obama working a till at a seafood restaurant, they made news around the world. But the photographs had particular impact in neighbouring Mexico, where many commentators contrasted Obama’s choice of a relatively mundane summer job with the conspicuous consumption and entitled behaviour common among children of the country’s elite.

Twitter lit up with comments comparing Obama’s behaviour with the children of Mexican politicians such as the daughters of President Enrique Peña Nieto, who often appear on the cover of society magazines. 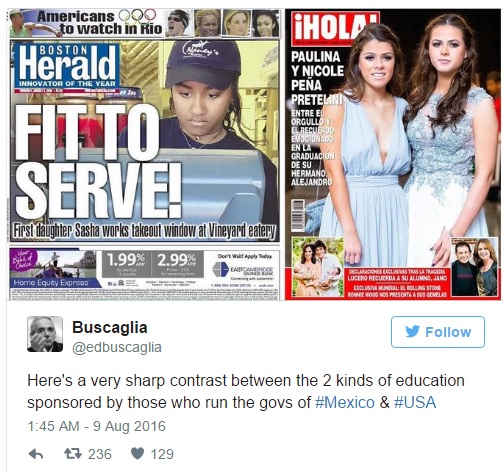 “From one pair of daughters to another: Sasha Obama works vacation days as a cashier; Paulina and Nicole Peña – daughters of President Enrique Peña Nieto – the cover of ¡Hola!” tweeted columnist Julio Astillero.