Bantú was a 25-year- old silver-back mountain gorilla that was born in captivity at the Chapultepec Zoo of Mexico City, and died tragically on Thursday July 7, while getting ready to be transported to the city of Guadalajara, in order to mate with a female.

Apparently, Bantú died from negligence from both the zoo authorities and doctors in charge of the transfer. However, other voices claim that Bantu was too old to be cared for properly and that the death was merely incidental.

One of the consequences resulting from this incident was the suspension of Juan Arturo Rivera Rebolledo as Director General of Zoos and Wildlife in Mexico City.

Meanwhile, according to experts, there were several flaws and deficiencies in the use of anesthesia, and some say protocols were not properly followed.

Paulina Bermúdez, head of NGO “Gran Simio de México”, declared: “Guillermo Haro, who is the head of the Federal Attorney for Environmental Protection (Profepa), should also be held responsible for Bantú’s death, considering the fact that the agency did not carry out an annual health revision on the ape for 8 years! Arguing that “it was not a priority for Secretariat“… 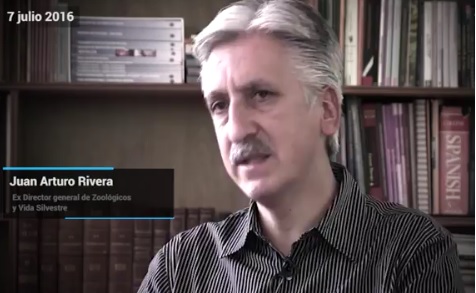 “The animal was handled by more than 20 people between veterinarians and assistants, when he was used to be handled by no more than 4 people at a time, the animal was exposed to a high level of stress right from the begining”.
“It is ridiculous that this transfer to the Guadalajara Zoo was supposed to be planned one year in advanced, and that so many anomalies happened that resulted in the death of this ape”.

The Department of Environment of Mexico City is currently being investigated for the presumed negligence in the protection and conservation of endangered species.

Gran Simio de México also requested independent personnel to participate in the forensic investigation of Bantú’s death, who was by the way, the only male of its species in Mexico.

But now, outrage grows significantly with the images of the autopsy that was performed on the ape, published by El Universal Mexico City based newspaper.

It is literally a butchery and some people have already expressed in social networks their suspicions that Zoo authorities intentionally planned to kill the animal from the beginning, in order to sell its organs on the black market.

On the photographs that were taken by Zoo staff, who asked to remain anonymous for fear of reprisals, it is clear that the gorilla was beheaded, its lower lip completely ripped off its face, its limbs were separated from the body; and also its internal organs are seen in a bag on the floor, which is totally against any protocol of hygiene and / or medical handling.

Paulina Bermúdez from “Gran Simio de México” demanded Tanya Müller,  Mexico City’s Secretary of Environment, to be also held responsible for the death not only of Bantu, but of two previous apes residents of the Chapultepec Zoo: Jambi an orangutan who died one year ago, on July 24 2015, due to a severe case of pacreatitis that two dozen veterniarians on the Chapultepec Zoo’s payroll could not prevent, diagnose on time or cure.

And Lío, a 35 year old chimpancee that suffered a sudden death three months ago, on March 23, 2016, and that Zoo authorities never could explain.

Tanya Müller declared that Bantu’s autopsy was carreid out following the proper procedures in order to be able to take brain samples of the ape, and she also said that the body had to be dismembered so the parts could fit into the crematorium, that can only hold loads of 70 kilos.

Nevertheless, veterinarian, animal expert and former director of the Mexico City Chapultepec Zoo, Marielena Hoyo stated that Müller is misinformed and sustained that the animal did not have to be dismembered in order to be placed inside the crematorium.

She claims that Müller’s statements are nonsense.

Marielena Hoyo concluded saying that she has placed large animals inside the same compartment to be cremated, but did not want to cause more controversy, so she would not make any additonal comments.