Tropical system in Gulf of Mexico could become cyclone during weekend

A broad area of low pressure over the Yucatan Peninsula and Belize has a 20 percent chance of developing into a tropical cyclone from Friday June 24 through the weekend, the U.S. National Hurricane Center said on Thursday June 23.

The Miami-based weather forecaster said some development of this system is possible on Friday after the low pressure moves over the Bay of Campeche and before it moves inland around the state of Veracruz on Saturday.

On the heels Tropical Storm Danielle, this tropical system will move onshore in eastern Mexico with drenching downpours and the risk of flash flooding this weekend.

A cluster of showers and thunderstorms associated with the system was drifting across the southwestern Gulf of Mexico, known as the Bay of Campeche, on Friday.

The system has a low chance of developing into a tropical depression over the Bay of Campeche before moving onshore in the state of Veracruz this weekend, according to AccuWeather Hurricane Expert Dan Kottlowski. 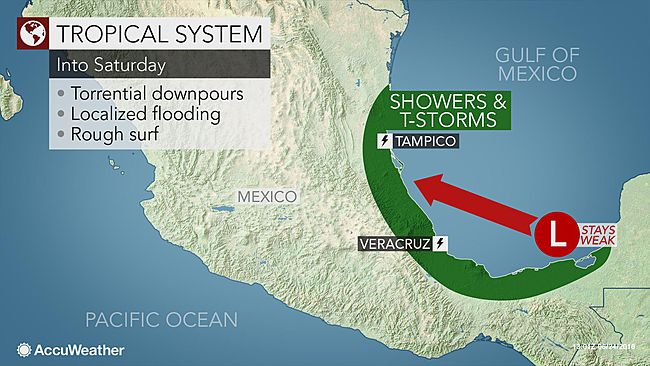 “Regardless of development, this system will bring moderate to heavy rainfall over parts of eastern Mexico,” Kottlowski said. Areas affected include the Yucatan Peninsula states of Yucatan, Campeche and Quintana Roo.

The system will wander in a general west to northwest direction and onshore this weekend.

The chance of development will end once the center moves inland. The system will then gradually lose any organization and downpours will diminish over time.

While the rainfall is needed in many locations following dry conditions from the past winter, too much rain will threaten lives and property in the region.

Where the rain falls on saturated soil, rocky terrain or urban areas, the potential for flash flooding will be enhanced.

In addition to the threat of flooding, the weak system will produce locally rough seas and surf, as well as the possibility of locally strong wind gusts in the vicinity of thunderstorms through Saturday.