Every couple dreams of the perfect wedding. But sometimes finding the right dress, the most beautiful flowers, or just a good wedding venue, is easier said than done. Creatively-themed weddings are getting more and more popular.

Today, The Yucatan Times brings you its top 5 most “unsual” weddings, to make you smile on a Sunday afternoon.

Who doesn’t get excited about the prospect of bagging a bargain?

Bride Lisa Satayut decided to combine that feeling with her excitement over bagging her beau. Explaining that T.J. Maxx is her “happy place,” Satayut married Drew Ellis in the size 8 shoe aisle of a T.J. Maxx store in Mt. Pleasant, Mich.

It was Big Macs, chicken nuggets and fries at a wedding banquet in Monterrey, Nuevo León, Mexico on that November Friday afternoon of the year 2010.

Fast-food fanatics Carlos Muñoz and fiancee Marisela Matienzo tied the knot at a McDonald’s in an upscale district of Monterrey, Mexico’s most “Americanized” city (along with Cancun).

“Some of our guests thought it was a joke. Our parents were resigned to it,” Matienzo told local media.

The local franchise for McDonald’s Corp (MCD.N) said the wedding was the first in one of its outlets in Latin America, a custom that has already taken off in Hong Kong for people seeking to depart from traditional marriage protocols.

‘Until Death Star do you part:’ Fargo couple gets married ‘Star Wars’ style.

David Bye and his fiancee, Melissa Reimer, married dressed in Star Wars costumes. He wore a Jedi-style black robe—the officiant referred to him as Anakin Skywalker, after all—and Reimer took a cue from the white lace dress worn by Padme Amidala during the character’s secret wedding to Skywalker.

All the wedding guests wore Star Wars customs as well. 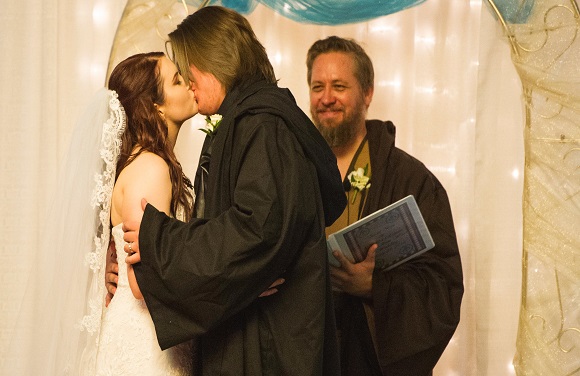 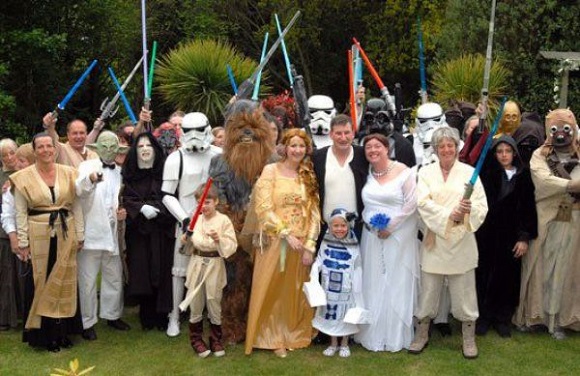 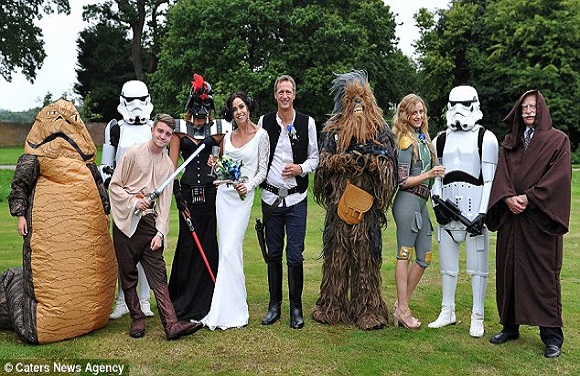 April Pignataro and Michael Curry of New York City got married in June 2010. The bride wore a white wetsuit and the groom wore a traditional black wetsuit as they climbed inside a 120,000 gallon shark tank to take their vows at Atlantis Marine World in Riverhead, N.Y.

Both are experienced divers and were protected by a cage as sand sharks, nurse sharks, eels and a giant grouper circled around.

The wedding couple wore scuba gear and special underwater microphones that broadcasted their words to each other, as well as to friends and family. They said their “I dos” over a radio transmitter with an officiant who, by the way, prefered not to get in the tank.

Ellie Barton and Phil Hendicott decided to celebrate their wedding in their birthday suits.

The pair of exhibitionist Aussies exchanged vows in front of 250 guests wearing nothing more than their wedding rings – and a bouquet of strategically-placed roses. Mrs. Ellie Hendicott wore a white, painted on “dress”.

The only thing she really wore besides the bouquet was a long white wedding veil. Phil Hendicott wore nothing but a black top hat to cover his manhood. The wedding ceremony was conducted in the morning, live on FM radio to hundreds of thousands of Australians.