Merida’s culinary scene continues to receive high marks in the international media. Here is an article from Culinary Backstreets by writer Ben Herrera.

Mexico’s Yucatán Peninsula was home to some of the most important Maya cities during pre-Hispanic times. One can still get a glimpse the glory of those cities in ruins such as at Chichen Itza, considered one of the seven wonders of the modern world.On the ruins of a smaller Mayan city, T’ho, the Spanish conquistadors founded Mérida in 1542; since then, the city has been the economic, cultural and gastronomic center of the Yucatán Peninsula.

We visited the city recently and fell in love immediately. Thanks to its proximity to the harbor of Puerto Progreso and the importance of the henequen industry – which turned the fibers of a native agave plant into rope – Merida’s culture, economy and architecture grew dazzlingly from the 19th through the early 20th century. The remains of that golden era can still be seen today in the downtown area and Paseo Montejo, a beautiful boulevard where the rich hacendados (hacienda owners) built their residences.

The Yucatán Peninsula has one of the most distinctive cuisines in the country, with characteristic dishes such as cochinita pibil, salbutes and huevos motuleños. During our short stay we ate remarkably delicious food that left us wanting more. These are a few of our favorites. 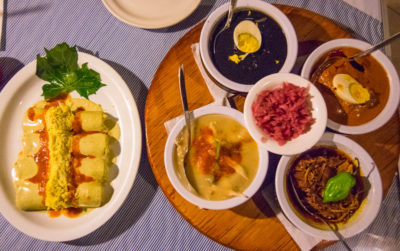 Chaya Maya
Chaya Maya is the restaurant that every tourist and culinary guide recommends – and for good reason. This unpretentious restaurant in the center of the city serves great classic Yucatecan dishes at very reasonable prices. To get a broad understanding of the region’s cuisine, we ordered Los 4 Yucos, a platter with four of the most representative dishes of Yucatan: cochinita pibil, or pork wrapped in banana leaves and cooked slowly underground; pavo en relleno negro, turkey cooked in a typical dark sauce; pavo in sac-ol indio, turkey served in a white sauce made with turkey broth, flour, corn and spices; and pavo al pipián, turkey in a pumpkin seed sauce. The platter is served with fresh handmade tortillas. To wash this feast down we ordered a chaya margarita, made with a green that grows in the Yucatán Peninsula and resembles spinach in color and flavor.

Cafetería Pop
For a quick and delicious breakfast, we like Cafetería Pop behind the Autonomous University of Yucatán. We had the traditionalhuevos motuleños, fried eggs served on top of fried tortillas and black beans. Pop adds cheese, fried plantains and peas to the dish. The coffee here is delicious and gives you the energy you will need to walk around the city during the day.

La Reina Itzalana
Another very traditional Yucatecan dish is sopa de lima, a tangy chicken broth-based soup flavored with the juice of the lima, a hybrid variety of sweet lime that grows in abundance in the Yucatán. The bumpy-skinned fruit has a tartness somewhat similar to the key lime, but with an incomparable flowery aroma and taste. Following locals’ recommendations, we had this delicious soup at La Reina Itzalana, an eatery inside a food market a few blocks west of the city center. This was a great place to eat and watch locals mingle. 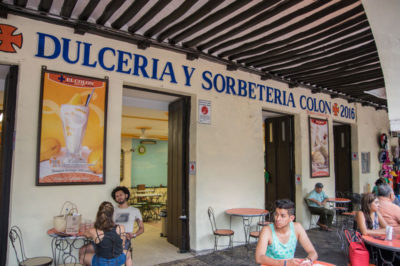 Dulcería y Sorbetería Colón
Mérida is known for its culture, gastronomy and beauty, but what nobody fails to mention when talking about this city is the scorching heat. The temperature reaches up to 45 degrees C (113 degrees F), and the humidity is always high. To cool down, we went to one of the most iconic venues in the city, Dulcería y Sorbetería Colón, where ice creams, sorbets and champolas, cold milk with a scoop of ice cream, are served. Our favorite was the mamey ice cream and peach champola. 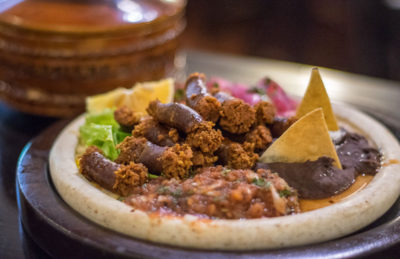 Hacienda San Ildefonso Teya
The history of Yucatán is closely related to those of haciendas and henequen production. Many haciendas now have been turned into hotels and restaurants and are preserved to show that bittersweet period of the peninsula’s history. When we were researching haciendas, one place kept popping up. Hacienda Teya is a few miles west of Mérida, but eating there is worth the short trip out of the city. The restaurant sits in a beautiful hacienda that is now a hotel and an event venue. We tried the Valladolid chorizo, chorizo cooked with beer and served with black beans, tomato sauce, picked onions and a salad. We loved the combination of flavors. However, our favorite dish was queso relleno de cazón, the rim of a queso de bola (a type of gouda cheese very popular in Yucatán) filled with school shark cooked in a white sauce.

Wayan’e Chenku
Tacos are an important part of Mexican regional cuisines, and this is also true in Yucatán. When we asked where we could have some tacos we were directed to Wayan’e, an eatery with four branches in Mérida. Our taxi driver took us to the one he knew best on the east side of the city. Wayan’e serves tacos de guisado,but, of course, the guisados are typical of the region. We had the traditional cochinita pibil and poc chuc, pork marinated in lime juice and grilled. But we also tried some delicious, new-to-us dishes, such as castacan, the fat part of the pork rind, huevo con xcatic, egg with a pepper indigenous to the region, and huevo con chaya.

Mercado Lucas de Gálvez
We stopped at this market for breakfast one morning and tried the huevos motuleños as well as salbutes, fried corn tortillas filled with refried black beans and topped with different guisados, such as cochinita and poc chuc. However, our favorite item at this market was the fresh juice; the chaya and pineapple combination was out of this world.