Pollutants in aquifers, a big threat for the Yucatan Peninsula (Part 1)

Experts from the United Nations University (UNU), a global think tank headquartered in Japan, have been warning environmental authorities in Mexico for a number of years now about the pollutants in aquifers threatening Mexico’s Yucatan Peninsula. This is the first of a two-part series on this issue, with Part 2 to appear Tuesday June 14 in The Yucatan Times.

The Yucatan Peninsula is a very popular tourist destination that has been subjected to intensive coastal development. This region is highly susceptible to contamination of its groundwater, aquifer, and coastal waters because of its unique karst geology that is composed of highly permeable limestone deposits. It is also characterized by an extensive flooded underground cave system where freshwater within the aquifers forms a distinct layer above salt water intruding from the sea.

The two water layers meet and mix in these flooded caves, which extend 8 to 12 km inland. On the land’s surface, sinkholes or “cenotes” as they are known in the Mayan language, provide passageways that link water originating from inland areas to discharge areas along the coast, thereby providing a route for pollution to reach the Caribbean Sea.

Since the 1990s, it is believed that land based sources of pollution such as discharge of (untreated) sewage and wastewater, along with overfishing, coral disease, and climate change, may have contributed to the loss of up to 50% of corals on the reefs along the region’s coast, according to Harvell et al. (2007). With a 10-fold increase in population expected by 2030, the problems are likely to worsen. 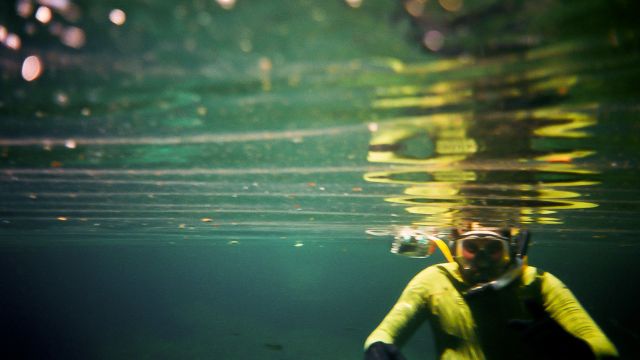 The Caribbean Coastal Pollution Project (CCPP), involving the participation of eight Caribbean countries, was launched in 2007 to help build capacity for improved assessment, monitoring and management of Persistent Organic Pollutants (POPs) and Persistent Toxic Substances (PTS) in Caribbean coastal ecosystems. Under the CCPP, a study was performed in an attempt to identify and measure contaminants in selected groundwater discharge zones along the Yucatan coast, and identify potential sources.

Two types of passive sampler technologies, Semi-Permeable Membrane Devices (SPMDs) and Polar Organic Chemical Integrative Samplers (POCIS) were deployed for a one-month period in 5 underwater cave systems from December 2008 to January 2009. SPMDs accumulate compounds with low water solubility, such as Polychlorinated Biphenyls (PCBs) and organochlorine pesticides, while POCIS accumulate more water-soluble compounds, such as current use pesticides and pharmaceuticals. This particular technique was chosen given that in the past it has proven useful for monitoring a wide range of contaminants in aquatic environments (Metcalfe et al., 2000, 2008; O’Toole et al., 2006, 2006).

Phase 1 of the CCPP was funded by the World Bank through Canada’s Persistent Organic Pollutants Fund of the Canadian International Development Agency (CIDA); phase 1 completed in mid-2010.

The United Nations University (UNU) is a global think tank and postgraduate teaching organization headquartered in Japan. The UN University works with leading universities and research institutes in UN Member States, functioning as a bridge between the international academic community and the United Nations system.