The award, which is presented each year to women who have left a positive environmental footprint through scientific or professional innovation, was first created in 2001 by Jacques Rocher, honorary president of the Yves Rocher Foundation, which is a subsidiary of L’Institut de France. 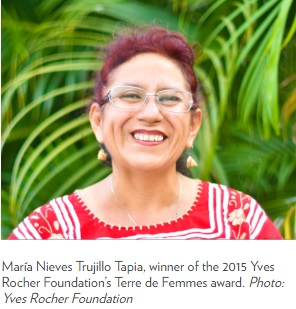 In the last 15 years, it has been awarded to more than 350 women with a combined value of nearly $2 million in grants for women in France, Germany, Switzerland, Russia, Morocco, Portugal, Ukraine, Turkey, Italy and Mexico.

Last year was the first that Mexico was included in the scientific contest, and Trujillo Tapia won the competition in Mexico to go on to compete against 10 other semi-finalists in Paris for the international award.

Trujillo Tapia’s project involved the development of an organic fertilizer to be used in the planting of hibiscus flowers in the southern central state of Oaxaca.