U.S. and Mexico agree to July 15 opening of PedWest lanes in Tijuana

Border crossers walking into San Ysidro, Calif. from Tijuana can expect some relief this summer with the opening of the new PedWest entrance.

According to the San Diego Union Tribune U.S. and Mexican federal officials on Thursday May 19 dended weeks of uncertainty over the start date for the new inspection lanes, announcing that they will begin processing pedestrian crossers on July 15.

The announcement was made in a joint statement by the U.S. and Mexican governments and sent out by the U.S. Embassy in Mexico City. U.S. Customs and Border Protection inspectors initially will process only northbound crossers, but the facility eventually will also be open to southbound pedestrians, the statement said. 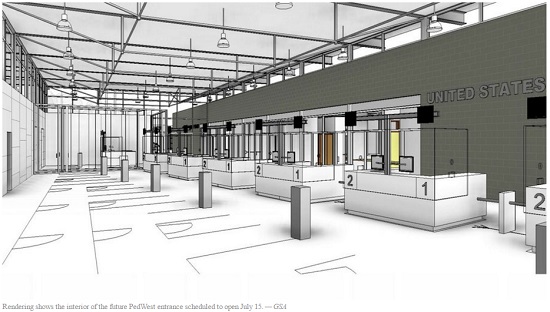 Part of the $741 million reconfiguration of the San Ysidro Port of Entry, the entrance is a critical piece of infrastructure for some 25,000 pedestrians who cross from Tijuana to San Diego each day. At peak crossing periods, waits can stretch for two or three hours at the existing outdated facility located east of the car lanes.

The U.S. General Services Administration, which is building PedWest, originally had planned a June 28 opening, but a funding snag on the Mexican side forced a delay.

The opening date remained uncertain for weeks, and was a subject of extensive negotiations between U.S. and Mexican officials.

The delay was cause for concern on both sides of the border who called attention to the situation, including the Baja California Tourism Secretariat, the Smart Border Coalition and San Ysidro Chamber of Commerce. Last month, members of an 80-member binational delegation led by the San Diego Regional Chamber of Commerce urged a prompt resolution during a visit to Mexico City.

“The decision on the PedWest opening shows how smart advocacy by local stakeholders can be effective in making projects a priority and can lead to positive outcomes on infrastructure investment,” said Will Ostick, the U.S. Consul General in Tijuana.

During the construction phase, authorities have committed to keeping at least six lanes open on the eastern side inside a provisional inspection facility that will operate inside the historic San Ysidro customs house.

Simultaneously with the opening of PedWest, authorities are planning the opening of the Virgnia Avenue transit center in San Ysidro that is designed to serve PedWest crossers. The $8 million facility, funded by GSA, the Federal Highway Administration and Caltrans District 11, will accommodate taxis, buses, jitneys, and include an area where pedestrians can be picked up or dropped off in private vehicles.