Mexico is currently generating world-class brands, highly recognized internationally, therefore, the London-based brand valuator Brand Finance, decided to come to our country, to operate in the Latin American market in order to establish themselves as leaders in evaluation of brands with a financial approach.

The British valuation consultancy firm unveiled the list of the 50 most valuable brands in Mexico, featuring Telcel, Cemex and Bimbo at the top three spots.

The study Finance Mexico 50 ensures that Grupo Bimbo, which ranks third, owns what according to this brand valuation and strategy consultancy, is the most valuable brand portfolio for consumers in the market, since “the brands behind the brands” have a substantial value, that is just as important for the consumer as the brand itself.

While Telcel, the company owned by Carlos Slim, is the most valuable in Mexico, with a brand value of $3.3 billion USD, which by the way, showed a slight increase of $88 million USD compared to 2015.

There are other brands that despite being relatively young, have become relevant in a short period of time, such as Izzi, which ranks at 22 on the list, or Volaris ranked at 45.

Currently Slim owns one of the most valuable and diversified portfolios in Mexico, and several of his companies are listed, including Telcel in the first place, Telmex sixth, Sanborns 17, Inbursa ranked 19 and Condumex 23.

Within the food and beverage sector is included the Herdez Group, as the owner of two brands on the list that are Herdez in 38 and Del Fuerte in place 42.

Another group that stands out on the list is Anheuser-Busch Inbev, with Corona in the 4th place and Heineken by Sol in 13, and also includes Grupo Lala in place 15 and Bachoco in 38 at the agricultural producers sector.

Regarding the retail sector, the list feautres companies such as Liverpool at No. 10, Palacio de Hierro in 36, Soriana in 9, Chedrahui at 16, Comercial Mexicana at 33, Oxxo in the fifth place overall, Elektra in 31 and Grupo Famsa at 43.

In addition, the list of the 50 most valuable brands includes brands such as broadcasters Televisa and TV Azteca. Businessman Ricardo Salinas Pleigo, owner of TV Azteca, also owns Banco Azteca, and Gamesa, among other companies.

According to Laurence Newell, director of Brand Finance Mexico, brands are one of the most valuable assets owned by a company or organization, and it is essential to understand its value.

With this study Brand Finance intends to present that value, as it has done in other parts of the world. It is important to remember that brands have a powerful effect on the long-term financial performance of a company.

Finally, the financial company Brand Finance officially announced their start of operations in Mexico, from which they will also attend to other Spanish-speaking markets of Latin America. 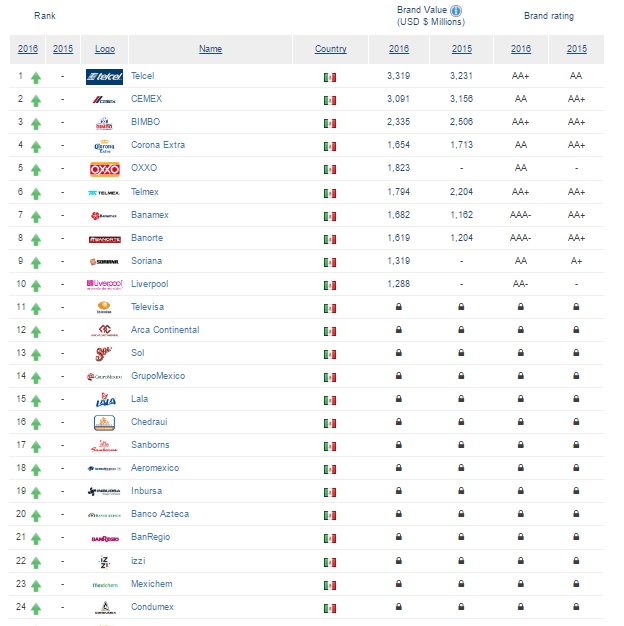