So said the head of PROFEPA, Guillermo Haro Belchez, after the inauguration of the Akumal-Tulum Regional Office, which will be managed by engineer Rodolfo Patricio Vilchis, who will have 6 inspectors for permanent care of the area of Akumal and Tulum, who started their first three of the 121 visits on April 14.

Haro Belchez announced that according to the commitment agreed less than a month ago, the environmental study of Akumal Bay was actualized, in coordination with service providers, and federal and local authorities; with which it was determined that no more than 230 to 250 people can provide the swimming with turtles service to tourists at the site. 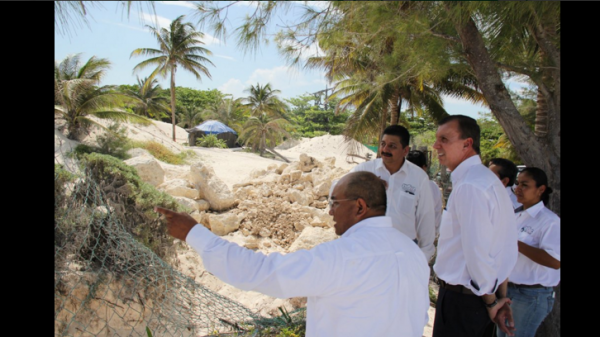 Meanwhile, he also noted that SEMARNAT will deliver within the offered Term, before May 15th of the present year, all the permits with consensus of the service providers for swimming with turtles. This, to ensure environmental order in Akumal Bay.

He said that the purpose of this action is to bring order, give certaintly, and establish a working alliance with all the residents and service providers in favor of the environment.

Because of that, PROFEPA conducted three closures to those who did not submit authorizations for works and activities on environmental impact.

In addition, the strategy of Inspection and Survaillance in Akumal Bay will allow PROFEPA to review 12 concessions in Federal Maritime Zone, 5 in Field of Wildlife  (Materia de Vida Silvestre), 1 refuge area, and 9 priority construction projects.

The Federal Attorney for Environmental Protection will verify the authorizations for non-extractive use of ecotourism activities, such as the snorkel guided swim for the sighting of Hawksbill  (Eretmochelys imbricata), Green (Chelonia mydas), Loggerhead (Caretta caretta) sea turtles species, and Elkhorn coral colonies (Acropora palmata).

Furthermore, monitoring of the refuge in Akumal Bay will remain. This is a marine portion located in opposite the towns of San Miguel, in the Solidaridad municipality and the towns of Akumal, Aventuras, Bahia Principe, Chemuyil, Xcacel-Xcacelito, and la Esperanza in Tulum municipality, designated to the protection of the species:

It is also conemplated the inspection of 95 real estate developments, in order to verify that they have the forestry and environmental impact authorization.

Inspection to 9 priority projects, which aims to check they stand by the current environmental legislation; inspection to 12 concessions to ZOFEMAT to determine the use and explotaition of the federal zone in compliance with the titles and remove street vendors, as well as unauthorized service providers.