How to invest in Mexico

Forbes contributor Sara Zervos examines various options for investing in Mexico. The opinions expressed are her own.

Looking at the country through an economist’s lens, Mexico’s economy can be described as mostly predictable and rarely volatile. However, the same cannot be said of Mexico’s stock and bond markets and currency. Given strong links to the United States’ economy, Mexico’s macroeconomic variables tend to move broadly in conjunction with the ups and downs of its northern neighbor. When the U.S. is expanding, so is Mexico; if the U.S. is in a recession, so is Mexico. However, Mexico’s asset prices tend to act and react to their compatriot emerging market asset classes – which are much more volatile. That said, Mexico’s principal asset classes tend to be “low beta” versions relative to most emerging markets (EM), so that when EM equities or bonds do very well, Mexico lags, but when EM sells off, Mexico acts like a relative safe haven. The Mexican peso is another matter. 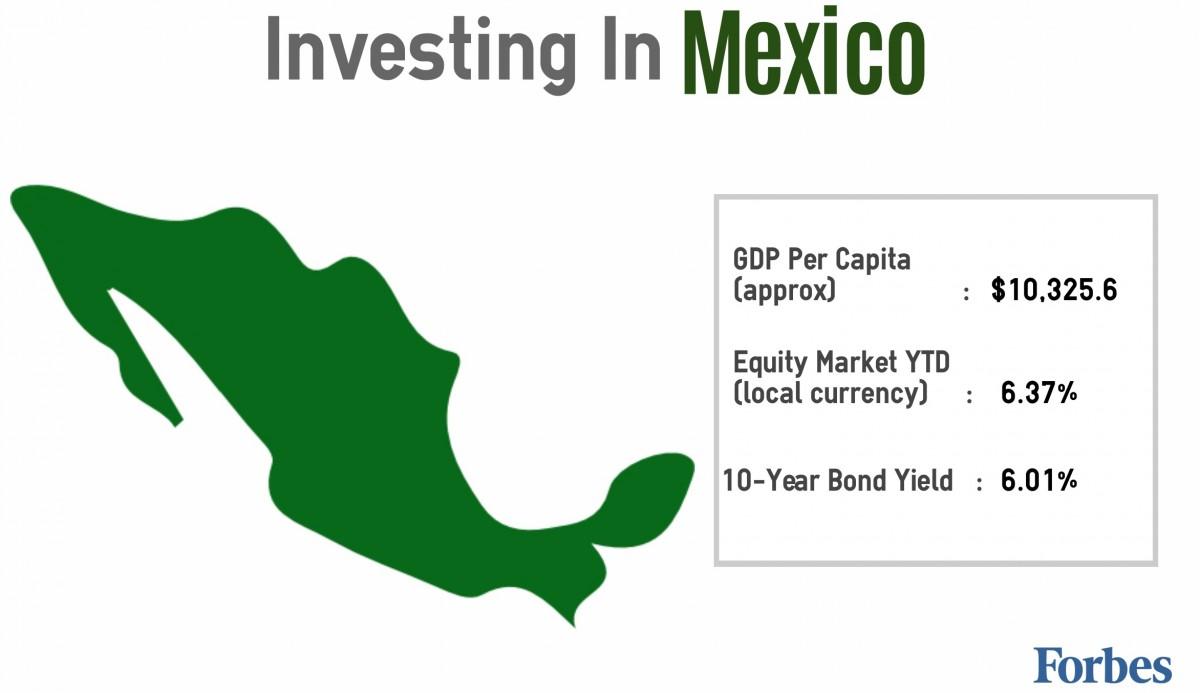 Mexico has several things going for it. As mentioned above, the country has forged strong links with the U.S., especially after the formation of NAFTA. As the country has an abundance of relatively cheap labor, it was an ideal, close-proximity destination for manufacturing plants from the U.S. and Canada. Through time, the country has benefited from technology transfer and has been able to increase the skills of its workforce. Second, for most of the last few decades, well-trained and well-respected policymakers have been at the helm of Mexico’s central bank and finance ministry. Under their leadership, Mexico has been able to weather several global crises and also transitions to different presidential leadership, by implementing conservative fiscal policy and prudent monetary policy.

On the negative side, Mexico has been historically reliant on oil to support the economy and to provide the bulk of government finances. As the commodity boom turned into a bust, oil revenues have dried up. Even before the commodity price turnaround, Mexico was struggling to keep oil production up as the main fields were declining.

Overall, Mexico’s growth has been steady and mostly positive, though just not stellar for an emerging market. As the above chart shows, with the exception of the Great Financial Crisis, Mexico has grown around 2-4% annually over the last ten years. Even as oil has fallen off, other sectors have been able to pick up. The recovery over the last two years in the U.S. has also helped pull Mexico’s growth higher. Meanwhile, inflation is at all time lows, mirroring developments in richer countries. Despite low inflation, Mexico’s central bank raised rates 50 bps earlier this year, responding to the hike by the Fed and the desire to maintain stability in capital flows.

Looking ahead this year, politics will take a more prominent role in headlines. First, Mexico has many local elections, which tend to inject a bit of volatility into capital markets. The next Mexican president will be elected in 2018. Second, given the strong statements by Mr. Trump in the U.S. as pertaining to Mexico, the U.S. presidential election could also influence Mexico’s markets. Meanwhile, economic indicators are expected to remain broadly unchanged, and unlikely to present any significant deviations in current trends. If the Fed hikes again (expected later this year, perhaps in September), Mexico is sure to raise rates by at least the same amount if not more.

Within Mexico’s asset classes, the movement of the peso has been striking. The peso has depreciated a massive 35% over the past five years, surpassing all but the most troubled emerging markets. Given the steady policies and relatively stable macro variables, many analysts attribute the weakness to a combination of falling oil prices and the peso’s enormous liquidity in the face of an EM rout. On the latter, as the EM asset class has struggled, the peso has served as a hedging tool for emerging market assets overall. The central bank and the government of Mexico have taken steps to shore up the international reserves since the Great Financial Crisis, and are consistently working to shield the peso from excess volatility. All said, the currency remains susceptible to depreciation pressures and overall EM speculation.

Mexico’s stock market, called the Bolsa, has done very well since 2012, especially relative to its EM competitors. Growing around 22% in local currency terms since January 2012, it has reflected the movements of the U.S. more than its southern neighbors like Brazil or Chile. As more fragile emerging markets have suffered capital outflows, Mexico has benefitted by being the safer alternative in the group. Looking forward, if emerging markets start behaving better, Mexico will likely lose flows on a relative basis. In particular, if Brazil comes out of its current political disaster with a positive outcome, investors may switch back. Global investors must also remain wary about the effect the currency has on returns. As mentioned above, and shown in the chart below, large depreciation can wipe out all the good equity returns. Fortunately, investors can access the Bolsa with ETFs in multiple forms: taking currency risk and also hedging it. Given poor performance of the currency, the hedged form has been more popular in recent years (see tickers DBMX and HEWW as examples).

The government bond market in Mexico is very deep for investors looking to invest in either peso or USD denominated bonds. Often providing a yield pick-up to the U.S. bonds of over 3%, foreign demand for bonds remain high. The caveat is the same as with equities; in one week in early May the peso lost 3% against the dollar, all but erasing the extra yield that Mexican bonds offer. As is the case with many emerging markets, decisions regarding positions in Mexico local-currency fixed income are probably better left to specialist, active investors who can selectively hedge the currency when necessary.

Positions in US dollar-denominated Mexico bonds are relatively less volatile, carry no currency risk, and offer a premium to US government yields of about 1.7% or 170 basis points (using 5 year credit default swaps as an example). Investors can access exposure to these bonds through a wide variety of EM bond funds – but need to pay attention whether the fund focuses on local or USD denominated debt.

In sum, Mexico’s equity market has had a great run for a few years. Whether this trend continues is more dependent on what happens in the U.S. and Brazil than what happens at home. The currency is likely to follow general EM sentiment, and local interest rates will be susceptible to U.S. interest rate policy and global risk appetite. Of the main asset classes, dollar denominated bonds are likely the best risk/reward for the uninitiated EM investor.

By Sara Zervos for forbes.com

This article is part of a series called “The Global Investment Guide: How To Invest In 25 Countries Around The World,” where I take readers on a voyage through the current investment landscape of the largest developed and emerging economies. For each country, I discuss the investment climate in terms of the macroeconomic and policy situations, the investment outlook across asset classes, and also indicate typical investment vehicles for accessing exposure to these countries.