Common Gallinule, a bird with the common name with “common” in it, is one of the world’s most widespread species occurring on all continents but Australia and Antarctica. But its common name hasn’t always been common. Nor have scientists agreed with the nomenclature of the Old World and New World species. Play the name game from Water-hen, Marsh Hen, Swamp Chicken, Common Gallinule, Florida Gallinule, Black Gallinule, Common Moorhen to finally (?) Common Gallinule. I still think of it as the Common Moorhen, so named after its European counterpart. (In this case “moor” referred to “marsh” in the thirteenth century.) Due to its vocalizations, and its bill and frontal shield formation, DNA (DNA = Dang New Analyses) studies now separate those living in the New World from the Eurasian inhabitants as separate species.

Although its basic adult body is dark gray with brownish back and white-tipped flanks, it sports a candy-corn colored bill with a red garter on each greenish-yellow leg. Maybe the name serves a purpose since the Common Gallinule is slightly larger than a gallon jug or is that “gallin?” Typically the one pound male weighs more than the female moorhen. Guess that could be a lesson or a “less hen.”

As a year-round resident in the Yucatan, it resides at well-vegetated freshwater and brackish wetlands. A separate winter migratory population also occurs here. Pair bonds may be seasonal or last for several years. As an architect, the female constructs the nest from the vegetative materials the male delivers. Both incubate the eggs and take care of the young. Sometimes another female joins the pair and shares in egg laying and parental duties. Wonder how the male manages?

From earlier broods juveniles may serve as babysitters with the younger chicks by feeding them and leading them away from danger. By the way, the light gray/whitish juveniles lack the bill colors, the frontal shields above the bill, and the scarlet garters of the adults.

Common Gallinule chicks look like aliens with the vivid red and blue bald head, colorful bill, and claw-like wings. Those wing spurs on help them climb into a nest or grab onto vegetation.

This omnivorous species eats mainly seeds of grasses and sedges and some snails. Add insects to its diet part of the year. It can hunt on land or dip its head underwater to forage or sometimes dive to obtain food. Long skinny toes enable it to walk on top of certain water plants. Why it lifts its foot out of water isn’t known. 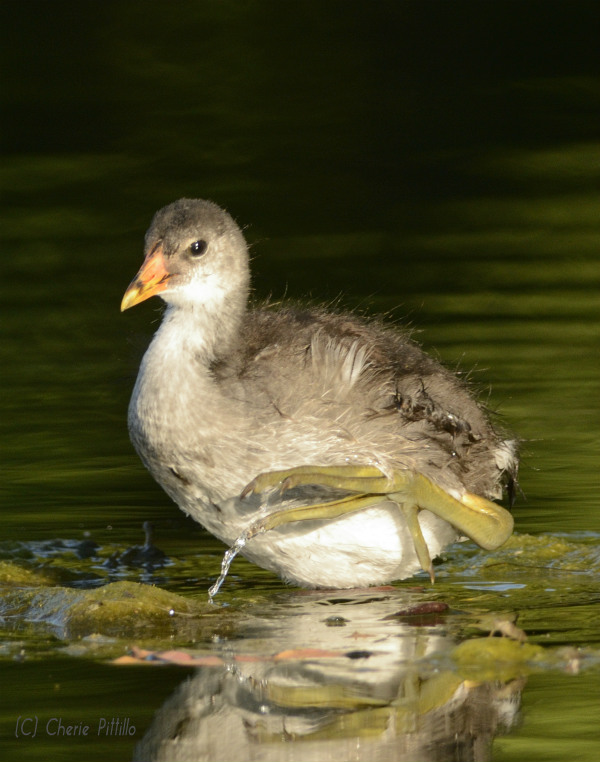 One source stated it rarely eats algae or that it would climb to search for food. I beg to differ.

Even though the Common Gallinule is an abundant species, contradicting research illustrates the need for more studies and hopefully no more name changes.

WALK A COMMON OUTDOOR PATH AND DISCOVER THE UNCOMMON.

DISCLAIMER: References do not agree on details about this species. http://bna.birds.cornell.edu/bna/species/685/articles/introduction, Sibley Guide to Bird Life and Behavior, http://neotropical.birds.cornell.edu/portal/species/overview, Sal a Pajarear Yucatan Guia de Aves,  A Guide to the Birds of Mexico and Northern Central America, Birds and Reserves of the Yucatan Peninsula, xeno-canto.org, https://www.allaboutbirds.org/guide/Common_Gallinule/lifehistory

Cherie Pittillo, “nature inspired,” photographer and author, explores nature everywhere she goes. She’s identified 56 bird species in her Merida, Yucatan backyard view. Her column, published on the 7th and 21st of each month, features anecdotes about birding in Merida, Yucatan and beyond. Contact: all4birdies@gmail.com  All rights reserved, ©Cherie Pittillo