After the release of activists Martha Capetillo and Jorge Mendiburu, who were arrested Tuesday May 3 by state police ordered in Chablekal to subdue neighbors who came to the defense of a 91 year-old man, who was the subject of an eviction, a human rights group accused the authorities of having committed excessive use of public force.

In addition, the rights group Indignación denouned alleged un-announced illegal detentions, raids on the church and private homes, beatings, threats and insults against people and observers of human rights and theft.

Indignación also alleged that the Attorney General (FGE) still is holding five people of Chablekal, including a 15 year old boy, who by Wednesday afternoon had not been informed of what crimes they are accused. 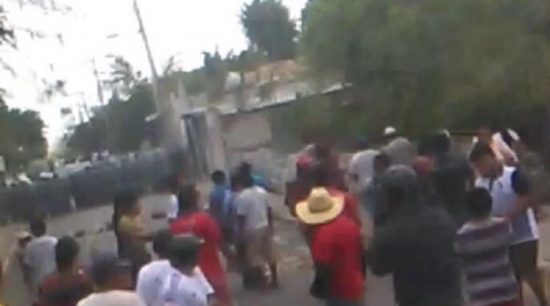 Tear gas was used in the disturbance Tuesday in Chablekal. (PHOTO: laviejaguadia.com.mx)

The human rights group said the detainees were taken from their home after some local people tried to take refuge inside before the barrage of tear gas.

The group demanded the immediate release of the five detainees, along with an investigation of the police and their commanders who allegedly violated human rights.

Indignación also demanded the return of everything “that police stole”, including “money, video cameras, and phones that recorded the facts.”

The activists detailed the conflict that broke out because state police, in an attempt to evict a person, raided the home of Pedro Ehuán, 91, who has a bakery and a snack bar in the center of Chablekal.

Realizing the situation, the neighbors came out in defense of the old man and they tried to enter the church to summon the whole community, the police raided the place to block their path.

However, someone managed to reach the bell tower and within minutes the community responded to the call, so more than a hundred police elements were mobilized to face the angry people trying to defend the old man.

Later, they said, “a fact of disproportionate use of public force against the population, came the rain of tear gas.”

Then the soldiers with shields and batons broke into the grounds for eviction, but were met with stones and sticks by neighbors.

In the clash two Indignación activists were arrested, along with the five detainees, plus several more were injured in the confrontation.