Peña Nieto advances debate about decriminalized drug use in Mexico

CNN reports that Mexico will take legislative steps to legalize the use of medicinal marijuana, and its government will consider penal code changes to decriminalize possession of small quantities of cannabis for personal use.

The announcement came from President Enrique Peña Nieto, who spoke at the U.N. Drug Policy Summit in New York on Tuesday April 19.
Peña Nieto said his government has held forums to get input from Mexican opinion leaders on ways to more effectively control the flow of illegal drugs while at the same time exploring alternatives other than the strict enforcement of regulations.
“As president of Mexico, in this special session, I give voice to those [Mexican opinion leaders] who expressed the need to update, within the confines of the law, the use of marijuana for medical and scientific purposes,” Peña Nieto said.
But the president went a step further, terming drug consumption “a public health problem.” His proposals, he said, derive from the forums his government has held.
“The participants in the forums also spoke about the importance of increasing, in accordance with international standards, the amount of marijuana that can be considered for personal use with the goal of decriminalizing consumers,” Peña Nieto said.
Defense attorney: ‘This is nothing new’
For María Teresa Paredes, a criminal defense attorney in México City, the president is not breaking any ground with the announcement, but adapting to reality on Mexican streets.
“This is nothing new. It’s what we [defense attorneys] experience on everyday life. People just don’t know it. Most police officers don’t bother detaining someone high on marijuana because they consider it’s not worth arresting a potentially violent person who the judge is going to let go on a misdemeanor charge anyway,” Paredes said.
Under the country’s health code, which regulates drug consumption, Mexican law already allows for possession of small quantities of certain drugs deemed to be intended for personal use as opposed to wholesale trafficking. The health code allows for possession of up to 5 grams of marijuana, 50 milligrams of cocaine and 40 milligrams of meth, among others.
But judges have great discretion when it comes to interpreting the law.
Paredes, the criminal defense attorney, says she defended a young man recently who was caught with 1 kilogram of marijuana. The judge let him go with a two-year probation sentence, which is being contested on violation of due process grounds. 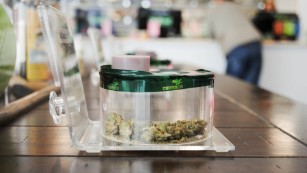 Mexico tried the strict law enforcement approach during the administration of conservative President Felipe Calderón (2006-12), Peña Nieto’s predecessor, with grave consequences. Tens of thousands of Mexicans died when drug cartels fragmented after Mexican security forces killed or put their leaders in jail. The ensuing power vacuum stoked violent firefights for control of territory that led to dramatic rises in murders, kidnapping and extortion.
Peña Nieto seems to favor a different strategy. “We need to define better solutions,” the president said, “from a perspective of human rights, prevention and public health to put people’s welfare at the center [of our agenda].”
Source: edition.cnn.com