High temperatures will prevail in the Yucatan Peninsula during the next five days as effect of an anticyclone system upon the region, the National water commission (Conagua) announced through its regional hydro meteorological center in Merida (CHMR).

The meteorological observatory of Merida, announced a maximum of 38.5 Celsius (101.3 Fahrenheit) at the capital of Yucatan, (around 3 pm).

CHMR predicts the heat will remain and even escalate from 36 to 40 degrees Celsius (94.6 degrees to 104 degrees Fahrenheit) in the state of Yucatan, and Quintana Roo will not stay far behind with temperatures from 32 to 36 Celsius (89.6 to 94.6 Fahrenheit). 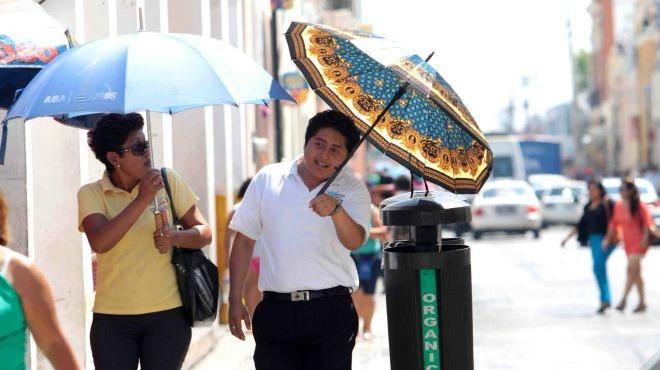 Mornings in the peninsula are starting to warm up, with temperatures ranging between 20 and 24 Celsius (68 – 75 Fahrenheit).

The potential for precipitation will change today for the Yucatan Peninsula, as isolated showers are foreseen caused by the tropical air coming from the south of Campeche and Quintana Roo.

The weather will be mostly clear with partial clouds in the coming days with an estimated speed of 15 to 25 kilometers per hour (10 to 15 per hour).