Billboards promoting condoms go too far for the people of Aguascalientes

Billboards showing two men kissing were too much for some residents of Aguascalientes, where claims of institutional homophobia have put an HIV prevention campaign under the national spotlight.

The advertising is part of a six-month-long, nation-wide campaign designed by National Center for HIV/AIDS Prevention and Control, or Censida, to promote condom use as a means to prevent sexually transmitted diseases.

Text accompanying the photo of the two men depicted on the billboards read: “A thousand ways to love, but only one to protect yourself. Use a condom!”

But on Monday March 28th, an unreported number of the billboards were removed by the state’s Health Services Institute, whose director said there had been complaints about the picture. The institute received about 70 phone calls from people who claimed the picture of two bare-chested men kissing made them feel uncomfortable.

“People were unhappy, and they claimed the campaign represented an attack on values,” said Enrique Flores Bolaños, who felt that the billboards were “only promoting the prevention of sexually transmitted diseases” and nothing else.

Local media reported that some of those demanding the removal of the photo belonged to pro-life organizations such as Mexico is One for the Children.

The leader of that group has declared that abstinence and chastity before marriage must be promoted to prevent sexually transmitted diseases. 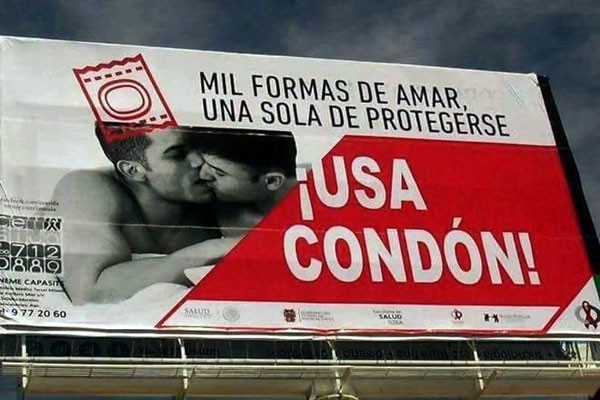 In response, 10 organizations that advocate for human rights and sexual diversity, united under the Movimiento Disidente, or Dissident Movement, demanded the immediate reinstallation of the offending billboards.

A representative declared they were also demanding an explanation from the head of the state Health Secretariat, Francisco Esparza, on the grounds that removal of the billboards represented an act of homophobia.

The leader of one of the organizations, Colectivo SerGay, questioned why the billboards had only been removed in Aguascalientes, because the HIV prevention campaign is national and none have been reported removed elsewhere.

“Only in Aguascalientes have the billboards been removed due to the intolerance of some. This is an act of institutional homophobia and is in clear violation of human rights,” said Manuel Gutiérrez.

Today, without warning, the billboards are back up again, their message unchanged. But the photo is a new one: a woman with her breasts barely covered is being embraced from behind by a man.

Gutiérrez called the change “a mockery” and charged that switching the gay couple for a straight one was a clear sign of “homophobic censorship.”

According to state health official Juan Carlos Torres, the installation and subsequent removal and modification of the billboards was done in coordination and with the authorization of Censida.