The Rolling Stones in Mexico City, will this be their last time there?

The Rolling Stones will play their second show in Mexico City tonight at the Foro Sol and will then travel to Havana, Cuba for a free concert on Friday, March 25, 2016.

“That’s my Spanish jokes,” said Mick Jagger, speaking in English for the first time about halfway through the two-hour-plus concert in Mexico City. The Rolling Stones had just finished “Honky Tonk Women,” and Mick was chatting up the crowd once again.

Speaking comfortable Spanish with a strong British accent, he told us the band had visited the pyramids, liked lucha libre (Mexican wrestling), and preferred mezcal to tequila: “Antes tomamos tequila, ahora tomamos mezcal.” (Before we drank tequila, now we drink mezcal.) Keith Richards’ loose swagger and rebel grin high on the big screens seemed to confirm it for the cheering, beer-swilling crowd.

But the big laughs came when Mick joked that he’d escaped from his hotel when Sean Penn came for an interview — referring to Penn’s recent interview for Rolling Stone magazine with Mexican drug lord El Chapo.

Mick also said it had been ten years since the Rolling Stones last came to Mexico. The fans were primed and ready: patient elderly couples with binoculars and expectant faces, men with Voodoo Lounge baseball caps and button-covered jackets, and extended families wearing matching tour t-shirts.

Ten years is a long time for an enormous, rock-loving market like Mexico. Months earlier, tickets had sold out in less than an hour, causing a second show to be added for later in the week. Mexico loves the Stones, and clearly the Stones — especially Mick — love Mexico, as he told 55,000 of us many times on the clear, cool Monday night.

In one of the world’s largest cities, struggling through a traffic nightmare, finding sketchy parking, and pushing past bootleg souvenir sellers clogging the sidewalk are only small inconveniences on the way to see the World’s Greatest Rock and Roll Band.

Which band in popular music is more legendary? Which band still tours — and sells out stadiums — after 54 years, isn’t a nostalgia act, and still has surprises and peak musical moments for the fans?

This tour of Latin America featured a setlist of classics along with special requests by Twitter for each city. In Mexico City we got a heavy, foot-stomping “Street Fighting Man.” Other stops on the tour saw special guests, like Juanes in Colombia, but other than a local choir for “You Can’t Always Get What You Want,” the night was all Stones.

Keith Richards stalks the stage like he owns the place — which, as we all know, he does. Most of the night his guitar was at least twice as loud as Ronnie Wood’s, or, for that matter, anyone else’s instrument, and he got huge cheers each time he hit a big, nasty chord in songs like “Jumping Jack Flash” or “Sympathy for the Devil.”

Anyone not a fool would expect the Stones to have slowed down a little — they’re grandfathers who’ve been playing live for half a century, after all. It wasn’t a flawless night, but the Rolling Stones were never the band to see for perfect playing, even in their early-seventies glory.

No, it’s only rock ’n’ roll, and we like it: relentless, hard-driving beats from Charlie Watts, unmatched showmanship from Mick, jagged riffs from Keith, moments of shimmering virtuosity from Ronnie (especially on “Midnight Rambler”), and quick-and-dirty, jaw-dropping solos from the other band members — with highlights being bassist Darryl Jones getting jazzy in “Miss You,” and saxophonist Karl Denson channeling recently-deceased sax master Bobby Keys in “Brown Sugar.”

Back in November, tickets sold out so quickly that by the time I got back to the computer after stepping away for credit card info, I’d lost my place in the online line. So I bought the cheapest ones for only about $25 USD each. The best seats, of course, were in the thousands.

These seats, cheap as they were, had a clear view of the whole stage at the opposite end of Foro Sol, a baseball stadium and racetrack that’s also the site of the yearly Vive Latino festival, one of the biggest music festivals in Latin America.

But maybe, at a Stones show, it really doesn’t matter how far away your seats are. Mick has an unmatched ability to pump up a crowd, no matter how massive. When Mick dances, strutting down the walkway and waving his arms like a raver girl on ecstasy, you pay attention.

Even when the cameras weren’t on him, when his larger-than-life presence wasn’t projected on the three larger-than-life screens behind the stage, just one clap of his hands instantly got the whole crowd clapping along, 95% of them on their feet for the entire show.

Though my seats couldn’t have been much farther away, I think they were closer than the other two times I saw the band, in 1994 on the Voodoo Lounge tour and 1997 for Bridges to Babylon, both at the Michigan State football stadium.

Twenty years later, after living outside of the U.S. for so many years now, I had no expectations to see a Stones show again. Those ‘90s shows were the biggest I’d yet seen as a midwestern teenager, and they came with groundbreaking stage setups: elaborate walkways, big inflatable dolls and devils, relentless fireworks and pyrotechnics.

Though we did get fireworks at the end last night, the band was undoubtably the focus of the stage show. The tiny figures with their neon suits shimmered and glowed on the distant stage, with only the visuals and graphics on screen to distract you. 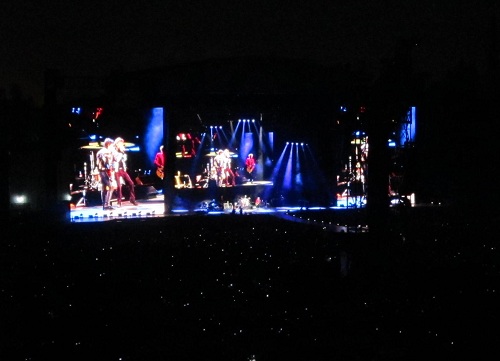 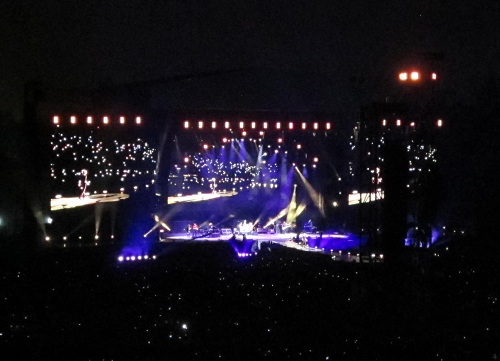 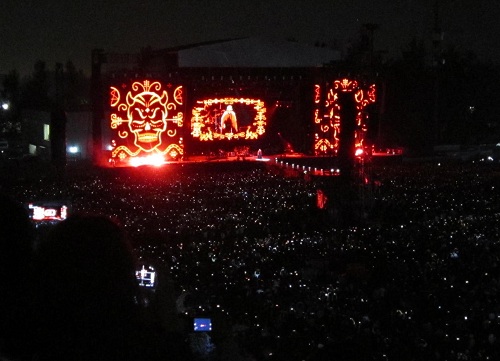 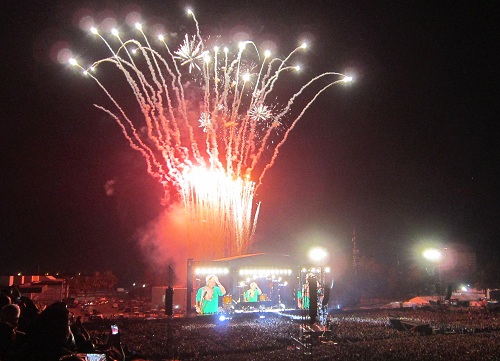 Beyond the personalities, the musicianship, and the spectacle are the songs, essential and immortal: the gospel swing of “Tumbling Dice,” the droning sitar-sounds of “Paint it Black,” the wailing vocals in “Gimme Shelter.”

And perhaps “Satisfaction,” in the final encore slot, really is the greatest of them all. When Keith plucks those first notes, using the same buzzsaw guitar tone of the original, you’re transported to a different time, back to the sixties, when “Satisfaction” wasn’t classic rock, but innovation.

On a Monday night in 2016, as 55,000 people sang along to lyrics they may not even understand, the energy of a song now 50 years old left no one doubting the eternal relevance of the Rolling Stones.

This article originally appeared at: https://nohaybronca.wordpress.com/2016/03/16/the-rolling-stones-in-mexico-city-march-14-2016/

Ted Campbell is a freelance writer, Spanish-English translator, and university teacher in Mexico. He has written two guidebooks, one for Cancun and the Mayan Riviera and another for San Cristobal de las Casas and Palenque in Chiapas, both available at Amazon.com. For more stories of adventure, culture, music, food, learning Spanish, and mountain biking, check out his blog No Hay Bronca.