The Wild Animal Sanctuary is the oldest and largest nonprofit Sanctuary in the world dedicated exclusively to rescuing captive exotic and endangered large carnivores, providing them with a wonderful life for as long as they live, and educating about the tragic plight faced by an estimated 30,000 such animals in America today.

Established in 1980, The Wild Animal Sanctuary, is a state and federally licensed zoological facility and a 501(c)(3) nonprofit organization. Originally started outside Boulder, CO, TWAS soon moved to Lyons, CO, where there was more room for the animals, and to provide for future expansion. After eight years in that location, TWAS was forced to move again due to a limestone quarry moving in next door.

The Sanctuary currently sits on 720 acres 50 miles east of Boulder. There is plenty of space for the animals’ 37 large acreage habitats, along with room to grow while still maintaining large grassland buffers.

The 11 felines, who were victims of mistreatment and exploited, were rescued in various locations and were temporarily being held at the bio-park in Pachuca, Hidalgo, where they were rehabilitated.

Environmental attorney, Guillermo Haro Bélchez said that on Aug. 26, 2015, one coyote and 11 other big cats were sent to the same place in Denver.

The Wild Animal Sanctuary has 300 hectares of land on which 350 different species of animals live.

Profepa and Semar posted various tweets about the event on their accounts: 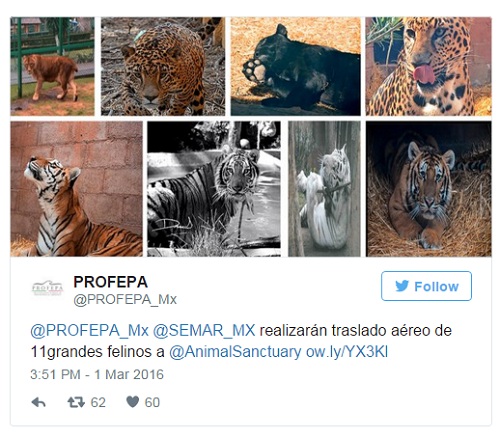