ARRECIFE ALACRANES — A makeshift submarine of the homemade variety ran aground on the Alacranes Reef more than 10 days ago and remains among coral and rocks in the northeast area known as ‘The Sandwich,’ in the Gulf of Mexico some 130 kilometers off the coast of Progreso.

The boat was tied to marine drug trafficking networks, the first evidence of the use of these boats for transferring drugs off the coast of the Yucatan Peninsula. Local fishermen alerted the authorities, the Navy of Mexico and the Attorney General of the Republic, although no immediate response was recorded.

The semi-submersible submarine seems to be have been built using fiberglass, with at least 10 meters in length at least one meter in width, with the presence of a detachment at the stern where they kept the drive system. 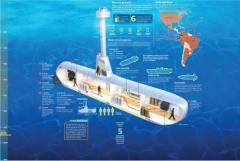 It was several days before personnel of the PGR arrived at the port of Progreso to initiate a preliminary investigation. Even if the vessel was not a narco submarine, the commission of an offense for damage to the seabed in the area known as ‘The Sandwich’ is presumed.

The submarine’s discovery was surprising and caused fear among divers and fishermen, although some mariners say it is not the first time they see this type of makshift boat navigating the peninsular coast.

This discovery seems to confirm that maritime drug trafficking routes were reactivated in the Yucatan Peninsula, as inferred with the stranding of the submarine in the Arrecife Alacranes.