Bill Gates topped the list of the world’s richest billionaires for the 17th time in 22 years.

Though the 60-year-old Microsoft head is $4.2billion poorer than 2015, his net worth of $75billion has put him in the top spot of the spot on Forbes’ World Billionaires list for the third year in a row, after overcoming Mexico’s Carlos Slim Helu in 2014.

Others who made the top ten include Amazon’s Jeff Bezos at fifth on the list, Mark Zuckerberg of Facebook at sixth, Oracle’s Larry Ellison at seventh, Michael Bloomberg at eighth, and tied for ninth are David and Charles Koch.

Zuckerberg, 31, had the best year of all billionaires, having added $11.2billion to his fortune and moving up from number 16 to six on the list.

This is Zuckerberg’s and Amazon’s Jeff Bezos’ first appearance in the top ten of Forbes’ annual ranking.

The top ten billionaires rake in a net worth of approximately $505.4billion.

Forbes found 1,810 billionaires this year, down from last year’s record of 1,826. The aggregate net worth of the billionaires was $6.48trillion, $570billion less than last year. 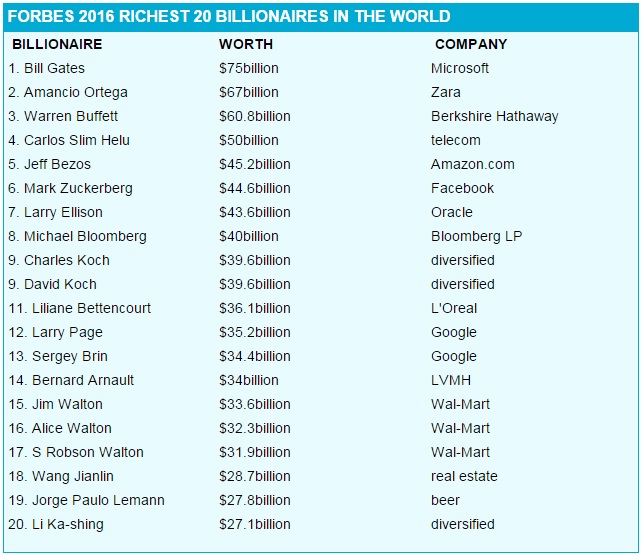 The average net worth of a billionaire dropped for the first time since 2010 and sits at $3.6billion, down $300million from last year.

While 221 people fell off the billionaires list this year, 198 people joined the ranks. Twenty-nine from the 2015 list died, while another 29 rejoined the list after having fallen off.

Of those billionaires who made it on to this year and last year’s list, 892 are poorer while only 501 have increased their fortunes.