The 3de3 citizens’ law proposal managed to gather more than twice the number of signatures needed to file a formal legislative proposal before the Senate.

Senate president Roberto Gil Zuarth received the 3 de 3 initiative on Friday March 18th and its supporting signatures of 291,467 citizens, well over the 120,000 that were needed.

The name 3de3, or 3 out of 3, stems from the call for three-way information disclosure — personal assets, financial interests and tax information — by politicians and public servants. The intention of the proposal is to make the disclosure mandatory for officials at all three levels of government.

“It’s easier said than done, but the effort is truly commendable,” said Gil.

The signatures must now be verified and validated by the National Electoral Institute (INE). If at least 108,000 of them comply with the necessary conditions, the legislative process is a go and the law will be discussed within the broader set of secondary laws of the National Anticorruption System.

In order to get to the discussion stage as soon as possible, Gil has asked the INE to fast-track its validation process.

The Senate president also asserted that it “will work hand-in-hand with the organizations [behind the 3 de 3 Law] towards a better institutional framework to fight corruption.”

Those organizations were, among others, the Mexican Institute for Competitiveness (Imco) and Transparencia Mexicana.

The proposed law aims to establish clear sanctions for crimes such as bribery, embezzlement, diversion of public funds, influence peddling, abuse of office, concealed enrichment, obstruction of justice, collusion, the illegal use of false or confidential information, nepotism and conspiracy. 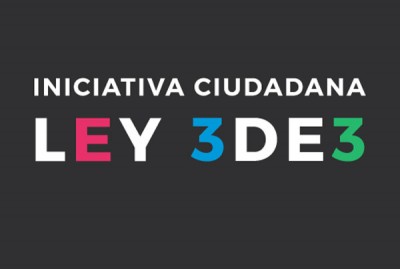 The 3de3 Law would also make companies accountable if they engaged in acts of corruption.

“The Mexican people have shown they can rise to the challenge that our republic faces . . . with an innovative and constructive law proposal. Public protest became civic participation,” said Eduardo Bohórquez, director of Transparencia Mexicana.

Along with the 3de3 Law proposal, the organizations presented the Senate with a series of recommendations for the design of the National Anticorruption System.

Due to scheduling in both chambers of Congress, a final draft of the 3de3 Law must be finished by May.

Bohórquez added that so far the governor of Jalisco has instructed his cabinet to comply with the 3de3 requirements, as he did himself. The governor of Guanajuato has also followed suit.