A family visit to Mexico prompts observations on Trump, gas stations and lifestyle

My family and I just returned from a visit to Mexico.  As always it was interesting.

To provide some background, I resided in Mexico a decade and a half, where I worked as an English teacher.  There I met and married Lilia, and later our two sons (David and Raphael) were born. Several years back, I received a job offer stateside and we moved here to the U.S.  But we visit Mexico at least twice a year, in the summer and at Christmastime.

Spending time in Mexico twice a year is an effective way to visit my wife’s family, friends, old sites, and to reconnect with the country.

This year we took an extra one-week trip, this month (March), thinking it would be good to visit the family in Mexico.  It was a good trip, albeit brief, though I feel we had a good balance of activities and didn’t try to overdo things.

Also, this time we brought along my wife’s cousin, who is also my sister-in-law. (That’s because she is married to my brother).  My brother and his wife live in the U.S., and she and her two daughters (my nieces) accompanied us.  That gave them a chance to visit her mother and other relatives.

We drove into Mexico and to the metropolitan area which we visit.  At the end of our trip we took a different route out of the country than we took in. 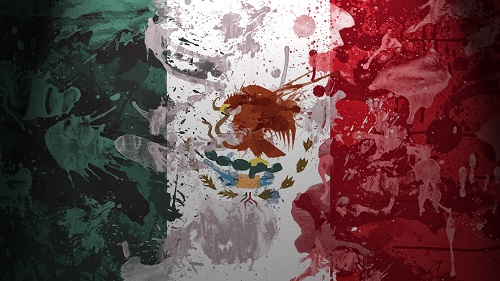 We visited my wife’s parents (she is an only child), and also saw relatives and friends.

My elder son David, who has his driver’s license, also got some driving practice in Mexico, both cross-country and urban.

It’s interesting taking walks in the neighborhoods in the vicinity of the house of my suegros (collective Spanish term for mother-in-law and father-in-law).  There are always interesting things to encounter, with a multiplicity of businesses in such neighborhoods.  There are mom and pop stores that sell snacks and soft drinks, and also mechanical shops and other businesses.  Raphael especially likes to take such walks.

We also find it quite convenient to have such neighborhood stores close to the house of my suegros, as you can step outside and walk a short distance to pick up soft drinks or snacks.  (As I explained in a 2014 article about our trip to Cuba (click here), I didn’t see such establishments there.)

In our March visit to Mexico, we got some car work done, getting our vehicle’s oil and transmission fluid changed.

We also ate in a couple of restaurants, our “regulars.”  I find certain Mexican beef dishes quite good, though they are unknown in the United States, at least where I reside.

A current hot topic in the Mexican news media is the candidacy of Donald Trump stateside. The media coverage of Trump goes on and on, and is quite negative, as I’ve pointed out in my previous article Donald Trump and Mexico.

During our visit, I watched Mexican news programs that called Trump a “racist” and “fascist,” and another one that spoke of the candidate’s “discourse of hate.”

Despite this, not everybody in Mexico has jumped on the Bash Trump bandwagon. Some expressed more nuanced views, exhibiting a little more understanding of the actual issues.  One taxi driver even said he was supporting Trump!

I understand why the Mexican media and political elite are lambasting Trump, as he threatens their program of keeping the northern border open.  But they might consider that Trump may actually win, and then the Mexican government will have to deal with him.

To allow a private American company to open gas stations is a real change.  And how is this going to work out?  An article said that Gulf would include both “help yourself” gas pumps and the employee service system currently used by PEMEX.  So how will that work?  Will both self-service and employee service pumps exist in the same stations?  I hope Mexican workers don’t lose their jobs over this.

By Allan Wall for TYT

Allan Wall, an educator, resided in Mexico for many years.  His website is located at http://www.allanwall.info.