Tons of cocaine found in two containers loaded with swordfish

It was reported that the review of the containers was slow, because in addition to the envelopes of drug found inside the fish, granulated cocaine was found between the ice shards covering fish. The Navy made the official report to the PGR on Friday night.

Two containers with 24 tons of sailfish, were inspected by officers of the judicial police on Monday February 22nd, inside the premises of the Ninth Naval Zone in Progreso to determine the exact weight of the drug.

Federal authorities presume that the total cargo could be more than three tons of cocaine. The Marina-Armada de México officially reported the seizure of two containers transported inside a cargo ship, manifesting 24 tons of frozen fish (swordfish), allegedly contaminated with a substance that proved positive for cocaine after laboratory tests.

The seizure was made in the fiscal area of ​​the Container Terminal of Yucatan, after a routine inspection to check the containers unloaded from the ship “San Adriano” from Guayaquil, Ecuador, with Progreso as final destination.

The contraband was made available to the authorities of the federation for the integration folder investigation. 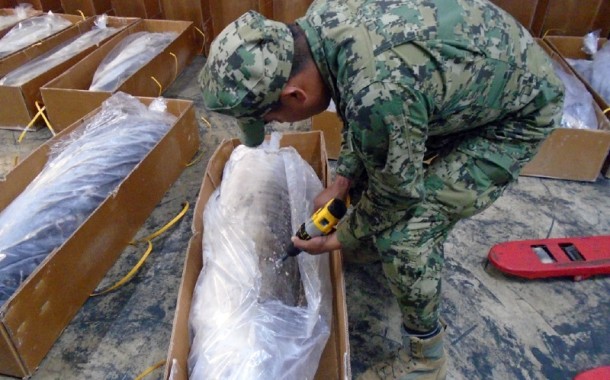 Meanwhile, the Mexican Navy in coordination with the Criminal Investigation Agency, conduct investigations to find the receptors of this drug shipment and determine responsibilities.