The Bank of Mexico has delivered a surprise rise in interest rates, sending the peso soaring almost 5 per cent on Wednesday Feb. 17 to 18.2 per dollar.

The half percentage point increase in its key rate to 3.75 per cent comes against a testing backdrop of volatility in financial markets, a weaker oil price and a crumbling peso. 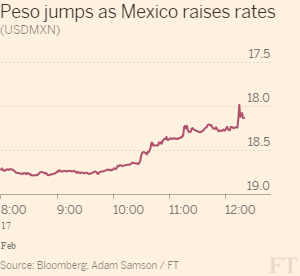 Before being catapulted higher by today’s surprise move from the Bank of Mexico, the peso had fallen almost 10 per cent this year against the dollar.

Although Agustin Carstens, the bank’s governor, cautioned that the rise was not the start of a cycle, he said that authorities will be paying close attention to what the Federal Reserve does with interest rates.