Innocent coatis are being poisoned in Playacar, Quintana Roo

After the Change.org platform began promoting electronic signatures to prevent the poisoning of coatis in the residential and hotel areas of ​​Playacar, near Playa del Carmen, Quintana Roo, animal protection activists demanded that this practice be stopped.

The initiative, promoted by Mexican Amaranta Gaytan, is addressed to the Federal Attorney for Environmental Protection (PROFEPA), arguing the following:

“In Playa del Carmen, specifically in Playacar Phase 2, coatis are being poisoned to stop them from damaging the golf course, please sign this petition so we can stop the killing of these innocent animals. Nobody has the right to kill wildlife and even less when they do not hurt us at all”, says the website.

Joaquin Ponce Torre, project coordinator of the International Fund for Animal Welfare (IFAW, for its acronym in English), said it is known that since last year groups within this private residential zone have carried out these kinds of practices to eradicate this wild species. 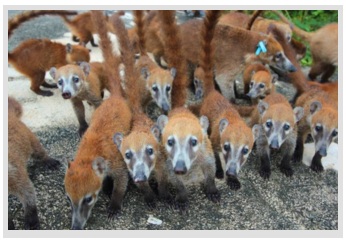 “We categorically stand against poisoning as a method of population control for any kind of wildlife, because it is cruel and unnecessary. The animal suffers a lot and also brings collateral consequences that could result in an ecological imbalance, ” said the specialist.

In addition there is evidence of at least three cases in which domestic dogs were poisoned, allegedly by ingesting the same toxic substances that have been used to make the coatis disappear from the same area; these dogs had to be taken to private veterinary clinics.

“I have reports of many coatis found dead together on golf courses since last year. People consider them a pest. Believe it or not, many hotels actually hire fumigation companies to do this kind of thing, to eliminate wildlife, ” said Laura Bevilacqua, a veterinary doctor with experience in wildlife conservation.

Extermination practices must be avoided

Bevilacqua stated that after detecting this situation, in 2015, a group of biologists and veterinarians proposed Playacar management to conduct a study to determine the population of coatis and investigate possible causes of death, but this did not have a positive response and simply was forgotten.

Representatives from IFAW, private veterinarians and researchers agreed that this form is not suitable for a species that share the environment with the local population and with the tourists of Playa del Carmen, so they asked the authorities to investigate the situation to avoid extermination practices that put in risk other wildlife, domestic animals, pets and even children who could approach the points where the poison is placed.

Meanwhile the Municipal Environment authorities declared that they were unaware of the current status of this situation, but accepted they had knowledge of these extermination practices last year.

“The complaint for possible poisoning must be submitted to PROFEPA, I understood that Playacar residents were working on a management plan with SEMARNAT to control the population of coatis; but I do not know if they finally did something about it, ” concluded Liane Aké Canto, director of Environment in the Municipality of Solidaridad.