Every week, two Empire State Building’s worth of plastic floats into the oceans. The people working on a new and ambitious technology startup, The Ocean Cleanup project, are quick to point this out.

They are also quick to follow up with this fact: their endeavor could clean up about 42% of the trash in the Great Pacific Garbage Patch, the world’s largest conglomeration of ocean trash, within 10 years. This would mean removing at least 70,000 metric tons of plastic over that time period.

That’s quite the assertion, and spearheading the claim is a shaggy-haired Dutch entrepreneur, 21-year-old Boyan Slat. As the founder and CEO of The Ocean Cleanup, he is both the face and the engine of the project.

Dutch entrepreneur Boyan Slat wants to build the largest floating barrier ever deployed and use the ocean’s own currents to capture plastic to clean up the massive Pacific garbage patch.

Having started off as a crowdfunded effort that has raised $2.2 million, Slat’s brainchild has come a long way—two mile-long, ocean-ready trials started working off the Dutch and Japanese coasts in 2016. If these prove successful, in 2020 a 60-mile, V-shaped apparatus will start concentrating ocean-strewn trash at a scale never before witnessed.

If the undertaking goes as planned, it could suddenly make an intractable problem seem surmountable in a sustainable period of time.

The ever-expanding mass of plastic that finds its way into the world’s oceans has extremely negative environmental, economic and health impacts. According to the United Nations, plastic pollution causes at least $13 billion in damage every year to industries including fishing, shipping and tourism. More and more studies are pointing out the potential toxic results of a sea filled with plastic, with can leach chemicals into marine life that is then consumed by humans, or simply end up as environmentally unfriendly debris. 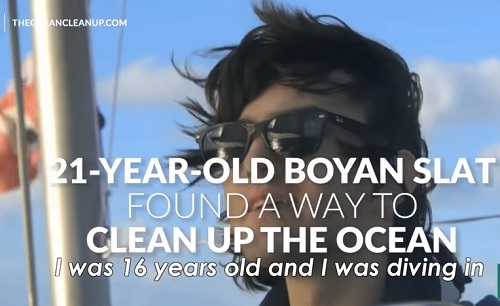 All in all, about eight million tons of plastic enters the ocean every year. In 2010, between 1.5% to 4.5% of the planet’s total plastic production entered the ocean, enough to cover every foot of coastline.

The Ocean Cleanup project wants to use the daunting scale of the problem—and the immense force of the ocean—to their advantage. One of the company’s main mottoes is “why move through the oceans, if the oceans can move through you?”

Put simply, the technology uses ocean currents to concentrate trash at a central point where it can be collected and then, ideally, recycled. The designers call this “passive technology” that gathers plastic as wind and currents naturally push debris into the boons.

The idea, while not necessarily a cure-all, has won a lot of support. For instance, the project was recognized as Design of the Year by the London Design Museum, which came with a more than $100,000 award.

Slat told the Guardian that “tens of companies” including large corporations “have shown an interest in buying up the plastic and that is our holy grail; funding the clean-up using revenues created by the plastic we extract.”

In researching the project, Slat and his team have found that most ofthe plastic flotsam is very close to the ocean’s surface, making it reachable for cleanup. Results from a research expedition to the Pacific earlier this year found concentrations of plastic in the Pacific to be at least 10 times greater than expected, Slat told the Guardian.

The longer this plastic remains in the sea, the more likely it is to disintegrate into hard-to-remove microplastics, which currently represent less than 1%, by mass, of the ocean’s plastic problem, according to Slat. The most common materials in marine debris are plastics, glass, metal, paper, cloth, rubber, and wood.

Source: The Huffington Post : This 21-Year-Old is Cleaning Up Our Oceans.