Gays and lesbian can now marry in six of the 32 Federal Entities of Mexico with the Mexican Supreme Court ruling unanimously that denying them the right to marry in the state of Jalisco is unconstitutional.

With the ruling it seems likely that the Supreme Court will now side in favor of gays and lesbians if any Mexican state’s ban on same-sex marriage is brought before it going forward, opening a path to marriage equality throughout Mexico.

Same-sex marriage was already legal in Mexico City, Chihuahua, Coahuila, Nayarit and Quintana Roo. All Mexican states must already recognize the legality of same-sex marriages performed in those states whether or not their state performs same-sex marriages yet because of a prior Supreme Court ruling.

The Mexican Supreme Court found that Article 260 of Jalisco’s state Civil Code “was unconstitutional because it undermined the self-determination of the people and against the right to free development of the personality of each individual.” 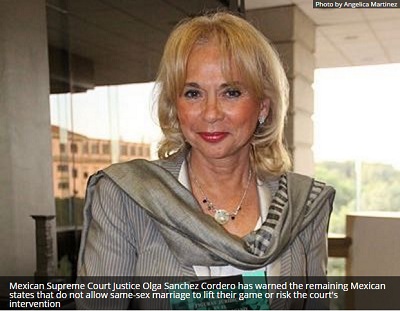 “Implicitly it generated a violation of the principle of equality, because from that purpose, a differential treatment of homosexual couples compared to heterosexual couples arose, to exclude the possibility of marriage,” the court ruling added.

Jalisco state sought to define marriage to only heterosexuals in April of last year in the face of mounting decisions by the Supreme Court in favor of gay couples to marry.

Now Jalisco must accept the court’s decision as it left the state no further avenue for appeal.

In an interview with the EFE news agency, Mexican Supreme Court Justice Olga Sanchez Cordero warned that Mexican states should make appropriate adjustments to their rules to ensure they were not declared unconstitutional by the court in future – suggesting that Mexico is now well on the path to full marriage equality.