For the fist time in history, the U.S. dollar broke the 19 peso barrier in banks, due to a small rise in the price of oil.

Thursday morning the trajectory looked good for the Mexican peso, until midday when the peso began to plummet next to the dollar. It fell to a historic maximum of 19.1 pesos per dollar and minimum of 18.6 pesos per dollar.

The dollar rose 1.34 percent, or 24.8 cents against the local currency, a devaluation that implies a new historic exchange rate of 18.78 pesos per dollar.

Despite the U.S. dollar’s rise in the morning, Mexico’s Central Bank (Banxico) did not need to execute any sort of dollar auction in order to maintain the market. 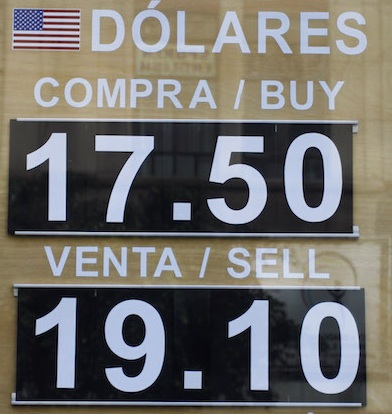 National Action Party (PAN) and Democratic Revolutionary Party (PRD) representatives told government authorities to leave their optimism aside and to recognize the critical economic situation of the country. Nevertheless, the president of the Public Budget and Accounts Commission and member of the Institutional Revolutionary Party (PRI), Baltazar Hinojosa, said that the government has taken the appropriate measures to confront the situation.

He said that the rise of the dollar should not impact the prices of products.

“We need to remain calm. Obviously this is a moment in which we need to act and I think that the government is acting in the best way possible,” Hinojosa said.