The Southern “art of moonshining” comes to the Yucatan Peninsula

Xcalak is a village of 500 inhabitants in the municipality of Othón P. Blanco, Quintana Roo, on the Caribbean coast of the Yucatán Peninsula. Xcalak is one of the last “unspoiled” stretches of Mexican Caribbean located on the southern end of the Costa Maya.

TYT’s contributor Stewart E. Rogers Jr., who is originaly from Greenville, South Carolina, published on his blog costamayalife.com the story of these expat distillers who are manufacturing batches of homemade liquor in this tiny fishing village south of Mahahual, Quintana Roo.

Where I come from in South Carolina, we are famous for our moonshine, that is brewed in the hills and mountains of North Carolina and South Carolina.  I was very surprised when I found out that there is moonshine being made now in Xcalak, Quintana Roo.

I have tasted the moonshine made in Xcalak, and it tastes just like it does back home.  I just find it hard to believe that good old corn liquor moonshine is being brewed in a place like Xcalak, on the Mexican Caribbean.

Established in 2013, they are proud to be the first artisanal brewery and distillery in the state of Quintana Roo.

They also brew their own beer in Xcalak.  They currently have three different types of artisan beer, Tarpon Tale Ale, Costa Maya Sunrise Amber, and Permit Me 1 Porter, which they sell on tap at their bar.  I have also tried their beer on several occasions, and it reminds me of the specialty brews made back at home in the USA.

So if you are in Mahahual or Xcalak, try some of the Muir Blanco moonshine, or one of their specially brewed beers to get a real taste of moonshine and beer brewed right here in Xcalak, Quintana Roo.

After a well needed vacation in Seattle, hopping from brew pub to brew pub…pairing all kinds of beers and oysters…the Randalls finally became addicted. Living in Mexico for the last 30 years, limited by Mexico’s brew, they were missing the other artisan flavours.

So, after a lot of trial and error, late night YouTubing, and help from friends in the business, they started brewing in their kitchen… using the guest bathroom as fermenting room… the whole family got involved in the bottling process…. then they moved to the garage… And eventually built an 1100 square foot nano brewery with a 1200 square foot adjacent distillery to it. Now, they cook on a Sabco brew magic system and brew 15 gallons at a time. 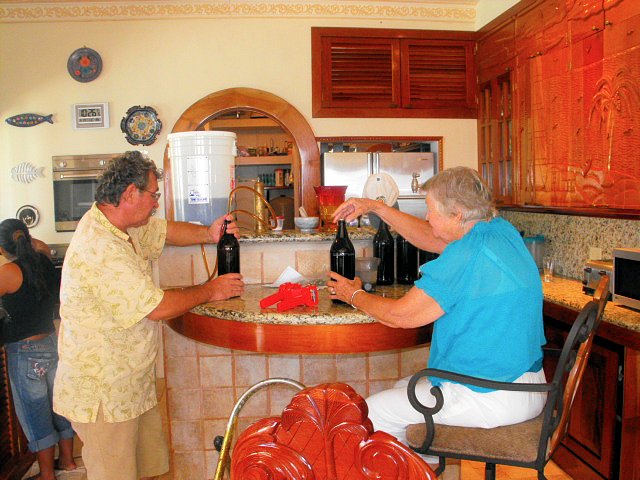 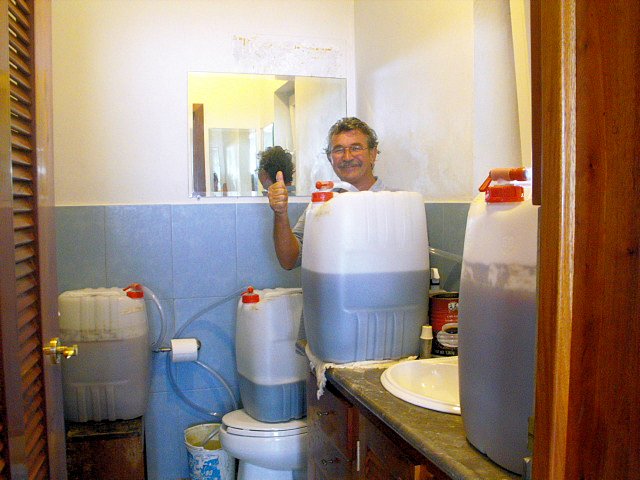 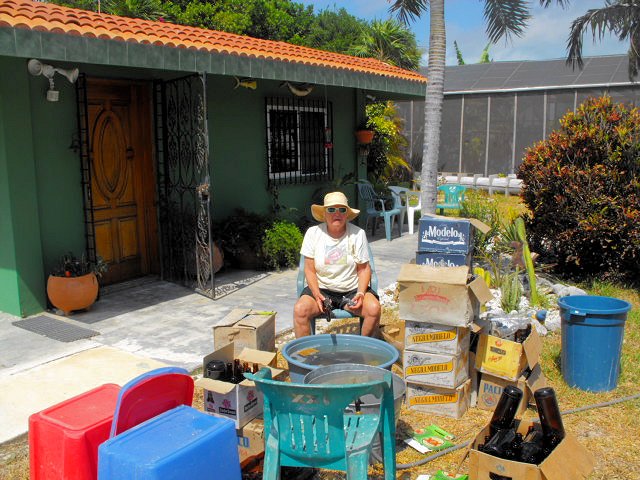 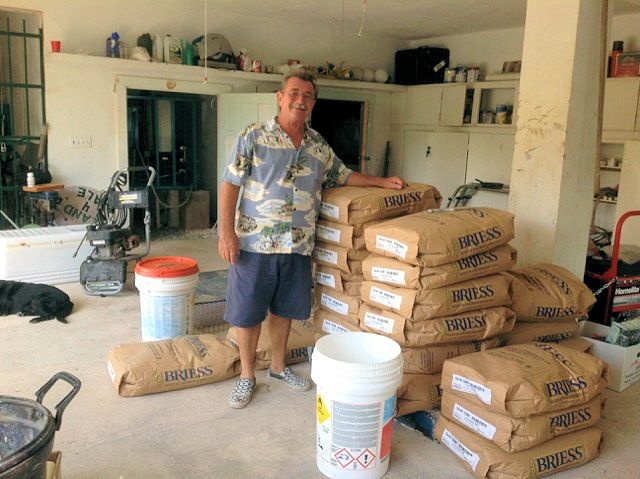 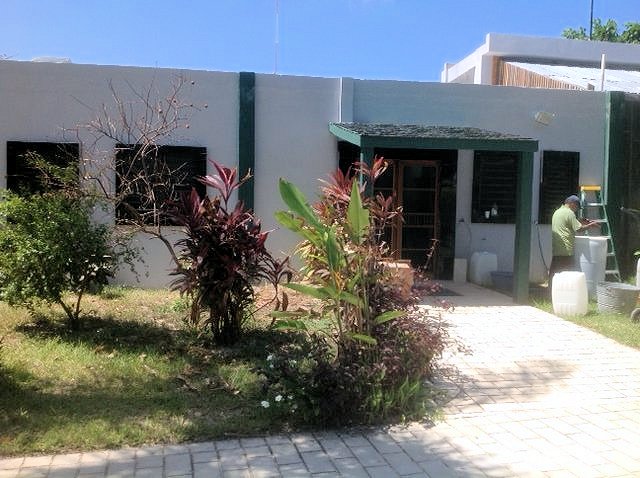 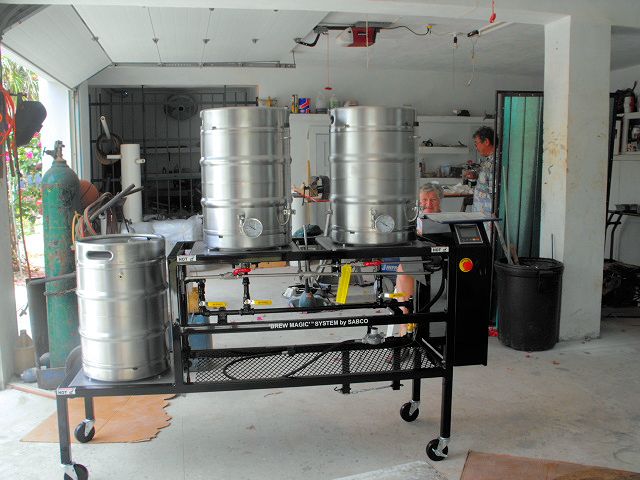 1. TARPON TALE ALE with a wild fish story in every bottle 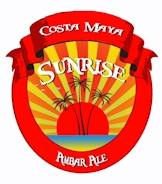 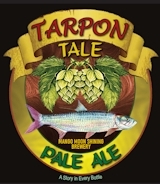 3. PERMIT ME 1 PORTER served on tap in their Costa de Cocos Bar

And then… along came the “White Mule” (Mula Blanca)

And after a year of brewing, and more sleepless nights on YouTube…. they contemplated distilling whiskey.

Mango Moonshining Inc. is located in the heart of the Mayan people, and “maiz” or corn and sugar cane fields not far away.  Fresh local ingredients gave birth to their CORN WHISKEY; better known as moonshine (first ever to be distilled in Quintana Roo), and that is how MANGO MOONSHINING CORPORATION began.

After a year experimenting with their first column still, they decided they needed a better way to process the corn, and another still to strip the alcohol out of the mash….

They even bought a new Ford Transit, to distribute their products around southern Quintana Roo.

Dave and Ilana Randall, and their little boutique hotel Costa De Cocos, are very well known in the international fly fishing and diving worlds, with articles about their place all over the internet and print world for years now. Costa De Cocos hotel features 16 gorgeous palapa cabanas.

They cater mainly to fly fisherman wanting to fish the Chetumal Bay area in search of a very do-able grand slam of fly fishing. Bonefish, permit, snook and tarpon are all in those waters and very catchable for the best anglers, and many try Xcalak year around.

Divers are their other big clientle with the waters off the shores of Xcalak part of a federally protected marine area that connects to Banco Chinchorro, Mexico’s crown jewel of diving.

They are also the owners of  “THE REEL INN, an onsite restaurant and bar. Of course they serve and sell all of their products there.

Stewart E. Rogers Jr., originaly from Greenville South Carolina, grew up in Germany, Japan,  and all over the USA. University of South Carolina 1980 BA in Journalism. Now a resident  of Mahahual, after living in Belize for 2 years, love the Caribbean, eat, work, live with  Mexicans and Mayas. Love Mayan ruins and history. Expert on Belize and Quintana Roo.  Not your typical expat. Webmaster at www.costamayalife.com