Rare January Hurricane Alex fires up in the Atlantic

A very rare January Atlantic hurricane, Alex, made landfall in The Azores early Friday as a tropical storm, according to the National Hurricane Center, and is now making the transition to a non-tropical low-pressure system in the northeast Atlantic Ocean.

The center of Alex made landfall on the island of Terceira in the central Azores around 9:15 a.m. AST Friday Jan. 15 with maximum estimated sustained winds of 70 mph, according to the NHC. The Azores are a group of Portuguese islands located 800 to 900 miles west of Portugal’s mainland.

Alex first became a hurricane in the eastern Atlantic Ocean Thursday, making it just the second hurricane on record to form in that basin during the month of January. The last hurricane that formed in the Atlantic during January was in 1938, according to NOAA’s historical hurricane tracker database. 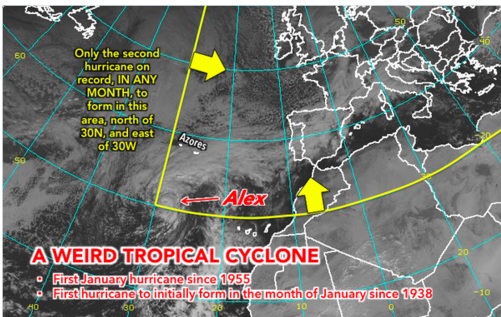 All previous other hurricanes tracking within 200 nautical miles of The Azores in the historical record occurred in either August or September.

Alex is now accelerating northward away from The Azores, increasingly becoming a non-tropical low-pressure system. Tropical storm-force winds were observed in parts of The Azores on Friday Jan. 15th. Santa Maria has gusted over 50 mph and Ponta Delgada has seen gusts approach 50 mph as of early Friday.