Bank of America Merrill Lynch’s Claudio Irigoyen and his team made an analysis of Latin American currencies, and declared on Thursday January 28th, that most of them are undervalued on cyclical fundamentals.

Irigoyen stated that the Mexican peso (MXN) Chilean peso (CLP), Brazilian real (BRL) and the Colombian peso (COP) are undervalued in trade-weighted terms by 9%, 7%, 5% and 4%, respectively.

But, the Mexican peso pared gains after the central bank’s announcement that it wouldn’t boost the size of daily dollar auctions disappointed investors who had sought an increase to support the currency.
As the peso posts the worst performance among its most-traded counterparts this year, the central bank said it would extend through March its program of offering $200 million daily in auctions triggered when the peso weakens by 1 percent from the previous day’s fixed rate and an additional $200 million when the currency weakens 1.5 percent. The peso pared gains after the announcement, trading 0.9 percent stronger at 18.3120 per dollar at 3:24 p.m. in New York after earlier advancing as much as 1.5 percent.
“Most market participants were expecting at least an increase in the size of the auctions,” said Juan Carlos Alderete, a strategist at Grupo Financiero Banorte S.A in Mexico City. “There’s definitely some disappointment relative to the expectations that they could have done more.” 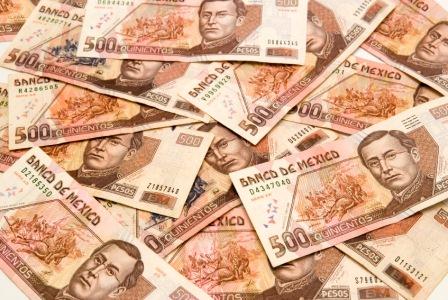 The peso, the world’s most traded emerging-market currency, suffered more than peers this year as concern that global growth is slowing prompted investors to pull out of assets from developing nations. Traders often use the Mexican peso to hedge other risks because it has high volume, trades all day and is cheap to borrow. That means the currency is vulnerable to overshooting when investors turn away from emerging-market assets. Mexico’s currency has lost 6.2 percent this year.
Extending the intervention program, which had been set to expire this month, is “the correct approach to deal with the external shocks that are having an impact on the domestic economy,” Carlos Capistran, the chief Mexico economist at Bank of America Corp., said in an e-mailed response to questions.